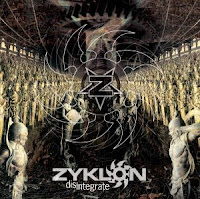 Perhaps the upwards velocity of the band had been curbed by the year 2006. With two unrelenting hybrids, generally well received slabs of modernist black/death metal attack beneath their belts, what more could the band really offer us? Would they simply turn back towards their mainstays and forget all about this project, or was there something else in the time streams planned for the Zyklon fan...it turns out this was the case, and keeping the same lineup and style intact from the sophomore Aeon, the Norwegian super group would once more emerge from their caverns of creation to try and bludgeon us upside the head once more.

Disintegrate is an anomaly to me, because for all purposes, its contents have been very carefully measured and committed to the studio with a lot of superior elements to the past. These are arguably the band's busiest compositions, and some will say their best recorded (though a case might be made for World ov Worm's less bassy scenario or Aeon's turbulent depths). I can't say I disagree, as this is the brightest, in your face record of Zyklon's career. Yet, for all its strengths, I found Disintegrate to be remarkably.. forgettable in the long run. Almost every song on this album contains 1-2 riffs of value and then a bunch of throwaway matter that feels like a retread of prior songs, which I can definitely live without.

For example, take "Vile Ritual", which has quite a lot of impact and a few excellent rhythms of hyper thrashing/death metal woven throughout, before it lapses into less interesting patterns and ultimately a half-assed thrash breakdown which brings nothing to the table until the solo, which is itself pretty lamentable. "Wrenched" opens with huge, evil old school death rhythm lent atmosphere by Tony's vocals, and proceeds through a decent, thick industrial sheen, but then eventually lags off into some dull chug that seems like a slightly less coherent version of "Core Solution" off the second album. Those are actually two of the better songs...because then you've got fare like "Vulture" or the Gorguts-like mesh of "A Cold Grave" which I wouldn't remember if you shot me with it.

The lyrics here are actually decent, but when you take into consideration all these simplified song titles like "Underdog", "Vulture", and "Skinned and Endangered", this album feels like its often some soulless attempt at creating a more extreme alternative to Fear Factory, with less of the industrial influence. Gone are such inspirational titles as "Hammer Revelation" or "No Name Above the Names", and one soon casts the impression that this album was far harder on the band's limbs than their imaginations. At the same time, it's not really something I would dub 'poorly written', just lacking any durable entertainment value. Surely, the performances are intense, especially in the drumming and shred work, but I can't recall a single moment where real excitement or surprise at some blazing, excellent riff transpired within me.

I think the large share of my disappointment comes with the missed opportunities here. For all intensive purposes, Zyklon could have become this magnificent beast which merged together the black/death metal and industrial-electronic output to something much more important and widely spread throughout the realm, and yet they've gone down the route of a straight death metal act with only a touch of the black remaining, and a few samples to boot. Perhaps this album's title was indicative of the band's own mental state with the project, because after its release the band would indeed fold, first delegated to a prolonged hiatus and more recently with the official notice via Samoth.

Verdict: Indifference [6.75/10] (my request is inconclusive)