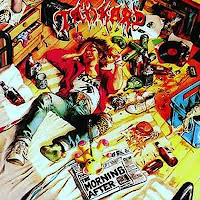 So, I love Tankard. I love Tankard like a man loves a woman (unless he loves another man). Sometimes you want to kiss her, sometimes you want to buy her the moon, sometimes you want to strangle her and sometimes you just want to run away screaming. Often the earliest part of the relationship is the most involved, the most hopeful and Romantic. You've got your entire lives ahead of you, and if you play your cards right, you can spend them together. In Tankard's discography, this equates to Zombie Attack, Chemical Invasion, and The Morning After, the three albums which can run toe to toe with almost anything else from Germany at the time. Now, if you're grasping your jaw in shock and awe that I just implied the mighty Tankard were the equals of Kreator, Destruction and Sodom then you might wanna take something for the pain, because I will continue to make bold assertions here, as The Morning After is one of my downright favorite thrash metal albums in history.

Zombie Attack was, and remains an underrated masterpiece of raw, punk-influenced havoc that I still listen to today with as much excitement as I had in my teens, but it was pretty clear by Chemical Invasion that the band were moving in a more technically proficient direction, and The Morning After is the culmination of that. At no time in Tankard's career have they been as fast and furious as on this album, with such impeccable velocity in their riffing. They may have 'matched' this level of speed and anguish on future recordings, but nothing would ever really compare to this. Axel Katzmann and Andy Bulgaropulos were a pair of beer swilling monstrosities that fired artillery cans of frenetic blitzing rhythms like few others in the late 80s, and the rhythm section of Frank Thorwarth and Oliver Werner were every bit their match, picking up the slack and anchoring the drunken overkill of their band mates.

For this reason, the production (which some find faulty) of The Morning After succeeds with high honors despite its rough and ready nature. This is another Harris Johns work, who was simply on fire at this point in his career, producing some of the finest metal recordings of all time. The bass is cranked to a good level, almost equal to the guitars, and really its all so spread out and balanced that it can be difficult to hear some of the more flurried activities of the six stringers. Gerre's vocals are likewise rough and uncircumsized, as if he were Schmier's nastier, immature little brother with a boat load more energy and a better skill at drinking and darts. This is the band's ultimate line-up, writing far more effective riffs than their later incarnations, and having 'grown' into a taut team of lush razor-edged barbarians who are almost dizzying in their momentum.

This would all mean nothing if the band did not maintain a high level of quality within the songs themselves. They don't simply explode in your face like a can shaken and popped open, they do so with the intention of leaving a positive taste in your buds that will long outlive the actual neck breaking act of 'being there'. Yes, this is a silly album, with songs about drinking, drinking and maybe a nod or two at society's faults at large, but mostly about drinking and then feeling violent afterward. This is testosterone of the purest strain, so girls need not apply. By 'girls', I mean people who have a hate on for 80s thrash and speed, or 'metal heads' who think pop music polish and excess studio castration somehow add up to good metal music. EXIT HALL LEFT you flippant fuckwits!

Now, crotchety old man rants aside, we delve into the album itself, with a hilarious intro that must warm the heart of the band and former Noise Records label staff to this day, a defiant and hilarious answering machine 'sample' that leads into the violent and vibrant classic "Commandments", which seems to me the ULTIMATE in peer pressure. Now, I've been to University, hung out with alcoholics and jocks and even straight edgers all my life, in various phases. None of them could drive me to drink at gunpoint, but when I hear Gerre exclaim:

I quaff and sop every sud like it was the last drop of my life! The riffs here are so fast that your head might just fall off if you attempt to bang along, and this doesn't end with "Commandments", because they immediately cock their fists and give it to you straight on the other cheek with the highly amusing "Shit-faced", a tribute to the wasteful excess of the rocker lifestyle. No hotel room shall be spared, no groupie and no bar tab! The riffs are amazing, spiraling completely out of control and exploding into a complex chorus and bleeding solo stream. By this point, the album is already worth anything you'd need to pay for it, but we've only just begun.

"TV Hero" takes you completely by surprise with a schizoid, semi-tech melodic riff the likes of which one might expect from Destruction or Kreator in the late 80s, but not the same band that spewed "Maniac Forces" or "Zombie Attack" just a few years prior. "F.U.N." teases you with a groovy blues-punk riff and some shrill vocals shrieking the song title, before a Kreator-like series of riffs that would have felt quite at home on Terrible Certainty if not for Gerre's vocal and the band's frequent foray into frolicking riffs. "Try Again" is a cover of the Spermbirds, with a melodic opening salvo similar to Overkill's "Hello from the Gutter", and then a mid paced punk riff akin to the Sex Pistols, etc. Thematically and musically, Tankard makes this fit right into the surrounding originals, and it's rather catchy.

Realizing that this diversion might delude listeners into thinking the band is somehow 'happy', the band next evokes the mean intro to "The Morning After", taking a brief spurt back to the jovial punk bridge before the speed once again erupts into a dragway pileup, complete with demonic pitch-shifted vocals and a stunning chorus that serves as little more than another excuse to speed back up and kick the listener in the sack all over again. "Desperation" is staggeringly excellent, as the notable drums and fast melodic flowing riff of the intro collide into a full on thrust of vitriol, all the while the guitars firing off faster than the latest military hardware and Gerre always sounding as if he's primed to start a fight or puke on someone nearby.

"Feed the Lohocla" (you get it, right?) begins with a mix of paranoid, punchy thrash riffing and wailing blues rock abandon before it, too, commits to rifling speed and splattercaust rhythms, sure to please anyone who enjoyed the first few songs on the album. The atheist anthem "Help Yourself" also has some spastic, acrobatic riffing that breaks the speed limit, with an excellent chorus that feels like something Artillery might write, save the vocals.

The album ends with a pair of shorts, the cute, punky abandon of "Mon Cheri" and then a loud, abrasive drunken cheer in the "Outro", and by this time, you feel like you've just been trampled over by a crowd of soccer hooligans rushing a field, a parade of fire trucks, a caravan of elephants transporting exotic spices and liquors to a distant land, a rugby team, a Jawa sand crawler, a gaggle of fat aunties heading home from church on Sunday, a pair of mating Bull Hippos and a marching band. You're out for the count, until one of your friends, or some stranger at the bar decides to poor something cold on you to awaken you for the next binge.

I could insert here the many memories I have of sharing this album with other skaters, thrashers and wild hearts in the 80s, including an old Portuguese friend (and former huge Tankard fan) stage diving off my couch at a birthday party, using this album to console myself after breakups or hard times, and other emo testimonials. You would relate to few, if any of these experiences, but you really don't need to hear them. The music on this album speaks for itself. It is pure masculine frenzy with little regard for pop garbage or social graces, like most of the best thrash of that decade. I would trade in just about every goofy alcoholic metal wannabe from the year 2000 on, collectively, for just this single album (a lot of them deriving more from Tankard than they realize). In fact, this is not only one of my favorite German thrash records, alongside Coma of Souls, Deception Ignored, The Antichrist, and so forth, but it represents the absolute peak of 'alcoholic metal', period. Ever. You can take that to the tap.

Verdict: Epic Liver Disease [10/10] (relieving stress is so much fun)