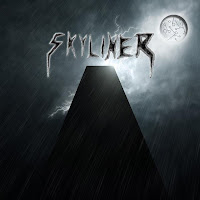 Skyliner is a Florida act which formed around the turn of the century, and have since produced a pair of demo recordings, this self-titled Skyliner being the more recent. The Sunshine State is probably best known for its death metal scene, lousy metalcore, and then what...Kamelot, Savatage, Iced Earth, Trans-Siberian Orchestra? So previously, if you had told me I'd be listening to the demo of a band from that region which reminds me of Germans Rage or the Italians Labyrinth I might not have believed you. Well, that band does exist, and the change of pace here is both welcome and refreshing, even if it needs a few more spins at the millstone to heighten the quality of its various grains.

There are three tracks here, in over 20 minutes, and of these, I feel the two metal ragers "Symphony in Black" and "Vendetta" were the strongest. The former is an honest, melodic speed metal piece which reminds me quite a lot of something that might appear amidst the late 90s Rage albums like Black in Mind or End of All Days. The riffs are solid here, and I enjoyed how the track took on a progressive spin deep in the bridge, with a simple and well laid, inspiring lead guitar (though I'd kill for a rhythm track to drive it harder). Jake Becker's vocals play it straight, but he often lapses into a Peavy Wagner edge that adds a stronger level of emotion. "Vendetta" benefits from an instantly memorable guitar melody not unlike Running Wild, and the vocals seem slightly angrier in general, with a strong line in the chorus. As for the keyboard...well, I'll come to that later.

The third piece is called "Aria of the Waters", and it's a lengthy, relaxing track of 8 minutes which summons forth a number of influences almost alien to the rest of the demo: soothing, progressive rock which recounted Queensrÿche, Marillion or deep 80s Rush (Hold Your Fire era, perhaps). Though I gradually fell beneath the lull of the shining guitars, samples of water and slowly rolling percussion, "Aria" suffers slightly from its predictable nature, and the vocals feel a sliver too overbearing, until the catchy rock chorus erupts. On the other hand, this is the one track on the demo where the keyboards actually shine, and the lead is once again pretty good.

Skyliner is a prime example of good intentions and a talented foundation being somewhat circumsized by the actual delivery of the music. Granted, this IS a demo, and few would expect a high level of professional embellishment, but with all the leaps in technology and the ease of recording in both the home and studio setting these years, one can't help but feel a few tweaks of a knob might have vastly improved the experience. For one, the synthesizers feel too jarring in places; in particular the charging melody of "Vendetta" (first example at about 20 seconds), where the keyboard line sticks out so sorely that it were as if one of the band members' little brothers strolled into the studio and tried to jam along on the old Korg in the backroom while they were laying out a track. I don't really feel as if most of the keyboard lines add much to "Symphony in Black" either, at least how they are presented. Another issue I took is with the lack of rhythm guitars below the leads in general. David Lee Redding's bass lines are thick and adequate, but I can't emphasize enough how much better the solos would be with a stream of chords (or single notes) flowing alongside them. I also felt as if Becker's vocals got progressively better with the more anger and passion he expressed through them.

These are all easily rectified stumbles, of course, and where it counts, Skyliner does possess potential in spades. They can write riffs and leads that you remember. They can lyrically balance a sense of spirituality, desperation, rebellion and hope without pissing anyone off. Becker and drummer Ben Brenner have a wealth of strong influences, which you rarely hear in US metal of this type. That alone is worth keeping our eyes open. This Skyliner demo may not be among the strongest I've heard, but it will serve as a positive control group and launch site. They've got their chromosomes in check, and if they can overcome a few technical faults to deliver material with the same ear catching flavor and a better production, we could bear witness to a strong new hybrid of speed, power and progressive metal.