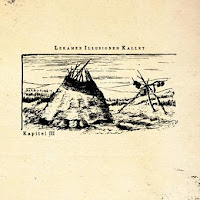 The third and final album of Sweden's LIK (excluding the possibility that Graav will record more now that he has revisited the project) is used as an attempt to tie off the ends of the previous two works, and though a defective version with an improper track list and lackluster production was released previously via Agonia, this new Frostscald release contains the material as intended. According to the bio, this record was thrown together rather quickly, in an inspired burst of creativity on the part of its maker, and that may explain its very short length.

Lekamen Illusionet Kallet, the spelled out namesake of the band's acronym, is only about 24 minutes long, with 4 tracks, but I was quite pleased to find a greater semblance to the debut Må Ljuset Aldrig Nå Oss Mer than the acceptable but underwhelming sophomore Besvärtade Strofer, despite the interesting lyrical concept of the latter. I find the tones here almost perfectly satiated, with an honest crispness like the debut, but serving to fix some of the shortcomings. The drums remain louder here like the second album, though still indicative of the simplistic rock influence of similar acts like a Joyless or Forgotten Woods, but the bass is also thankfully running right up the middle as intended.

"I Tidens Ände Är Det Tron Som Består" is incredibly sincere and organic sounding, as it trudges through some varied discordant rock riffing that really picks up steam in the bridge, as a spike of melody glints across its dreary surface. The entire, lilted atmosphere of this track puts you right back in the mood of the debut, and then the "Röd Puls" revisits the dark and primitive Gothic/surf pulse of "Hate to Be Human", with faint guitars repeated over steady, subtle bass and all manner of rising and falling whispers and moaning. "Vredens Trolldom" is somewhat of the album's crushing piece, with caustic, creepy guitars over another gently pumping bass line, and another serving of Graav's ranting tongue. The sheer mystique of the metal riff that comes into play before 3:00 with the deep horn in the backdrop is quite a touch, and "Visioner Om En Ödslig Framtid", the closer is this morbid instrumental piece which with glinting, knife-edge guitars that would fit perfectly in a silent black/white horror film, or perhaps some grim, hopeless Western of antiquity.

Lekamen Illusionen Kallet is rather brief, and for that reason some might consider it more of an EP than a true full-length effort, but at least it doesn't squander its length on anything less than titillating. The writing is very comparable to the work the debut, and more of an extension on that with higher production values, which cycle it more closely towards the second album, so it functions as a fitting bookend to the Graav's original concepts. This is only going to entertain a select audience, like anything else the man has released, but it's a fairly fresh twist on a genre in dire need of evolution, even if the humble tones of LIK might seem more like a regression to a path black metal might once have strode upon, but didn't.