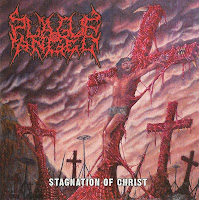 Not a lot of Swedish death metal acts venture forth from the eaves of the grinding, enbalming tones so important to its past. Many are quite content to channel Grave, Unleashed, Dismember and Entombed once more into the ears of the willing, and there will always be a place for such. Others, like this Plague Angel, walk a crooked trail slightly right of the Left Hand path. Clearly the influence is felt to some degree, but these Swedes venture across the Atlantic to cipher such legends as Autopsy, Immolation, Incantation, Malevolent Creation, Deicide and early Death, without sounding simply like a tribute band.

The tones produced on Stagnation of Christ are nothing short of flesh churning, with deep, chunky guitars and enormous bass. The mix of the album is perfect, like being beaten over the head repeatedly with a tombstone by some Frankenstein-like entity, its cold, uncaring hands the vehicle to your end. The band is capable of an immense amount of force, yet this rarely takes the form of anything more intricate than a blast beat and a writhing, down-tuned picking rhythm that bounces beneath the meaty throat of Jörgen Jern, who is part Chuck Schuldiner, part Chris Reifert and part Martin van Drunen. Drummer Tobias Israelsson is a beast. There might not be much nuance to his performance, but you can just feel the sweat flecking as it must have off this guy's brow as he was laying out this smiting in the studio.

The band reminds me slightly of Krisiun for the relentless, heart pounding energy that often erupts, but Plague Angel are anything but monotonous, willing to slow their storm to a choppy, crawling hammer of a riff that be the foreshadowing to many a 911 call. Good examples are the title track, which feels like a tank platoon moving faster than they have any right to, and then subduing itself to a few simple, bludgeoning rhythms which hold the attention nicely. "Void Walkers" and "Deviants of Humanity" are both cool, the former with some snarling off vocals and the latter with this great, swerving guitar rhythm that collides well with the blasting background. "Corpse Collector" and "Raped By Lies" should also have you slamming like it is 1993 all over again, and I too enjoyed "The Asylum", with a brief, brooding piano that shifts straight into warfare mode.

Because a fresh and bloody slaughter would not be enough, Plague Angel have included here their 2008 demo Raped by Lies. All four of these tracks are already incorporated into the new material as a part of the album itself, but the demo versions have a more roughshod production that in a way is equally as charming, so there is no lack of value, and you are enabled to own the band's entire discography (to this point) on one release. No losers here, unless you're a loser who doesn't run out right now and check this out! Plague Angel are not the saviors of death metal, and they're not an original band, but they are aware of their strengths and use them to crush the listener like an insect. No, the Savior's memory might be hanging stagnant upon an ages old, open air prison, but these Swedes prove that there is much 'life' left in even the most brutal and pedestrian artisans of this genre.