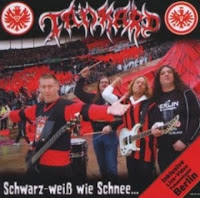 Tankard have generally been pretty stand-up with their fans, releasing a large ratio of full-length studio albums and very little fluff in between. Sure, they've got the expected live album, a few compilations and singles (some of which were probably not released at the bequest of the band), but in nearly three decades, that is not so much. As far as EPs, we've only had one, the 1989 Alien which was a lot of fun, so when the band decided to release this Frankfurt soccer tribute with a couple tunes in German, and some bonus videos, well who can really fault them?

Sadly, if you're not local to the band, this is not going to grab you by the balls (har har). "Schwarz-Weiß wie Schnee" is a melodic metal anthem, with some manly vocal chorus and half-decent riffs, and it's included here with both a full-fledged studio and demo version, the former of which is superior. "Eurobbapokal" is another soccer thrash tribute given a big, anthem treatment, though its under 90 seconds in length. The other audio track here is a live version of the band's Cocksparrer cover "We're Coming Back" (the studio edit appeared on Beast of Bourbon). It's vibrant but forgettable, and not much use here.

But the contents of the EP do not end with just the audio. This is one of those 'enhanced' CDs, and the band have included two videos. The first is for "The Beauty and the Beer" off the album of the same year, and it's a pretty bland video which features the band just playing live, Gerre bare chested in front of a bunch of Euro beauties sitting at a bar. The song itself is quite good, but once you get past the humor of Gerre groping and pressing himself against these women who are trying their best not to laugh or show any signs of emotional response, it's not something funny enough that I'd watch it very often. The other is a hand cam of the band performing "Schwarz -Weiß wie Schnee", which is nothing surprising, and the band have made their love of soccer known on a number of occasions (look up their "Forza SGE" video).

I can't see anyone really caring about this release unless they love soccer and Tankard both, and though the music included isn't so bad, or the video, it's not much of a distraction from the band's studio discography, and should not be taken as such.