Lifeless - Beyond the Threshold of Death (2008) 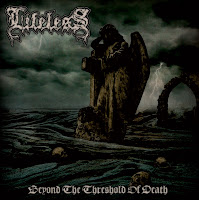 I'll give you three guesses as to which genre of music Lifeless plays, and even a bonus hint: they don't do the calypso. No, this is yet another in a seemingly endless parade of old school death metal bands. Perhaps a little soul searching has been done here, and the band have decided, like so many others, that the late 80s and 90s are where things need to return. I can't argue with this disposition, since it is true that most of the very best death metal efforts hearken from such an age, where the atmosphere of the graveyard was still a creepy, novel element to incorporate into extreme metal.

The key in this band's sound is that they have an excellent grasp of how to set up an album so that it flows through moments of melancholy and aggression in even parts. Much of the band's sound is rooted in a more melodic alternative to the classic bands like Death (first two albums), Autopsy, Asphyx and Obituary, but they have a far more theatrical flair to counteract the bludgeoning old school rhythms. Yes, these are the sort of guitar riff that a novice could write in a matter of minutes, but then again, that's exactly part of the appeal to something like this, and Lifeless have a penchant for writing almost uniformly catchy material that does little to challenge the mind, but a lot to evoke the restless spirits of the past.

The intro is appropriately moody, sepulchral synthesizer music with samples of warfare and feet sloshing across wet earth, and then a familiar sounding doomed melody heralds the arrival of "Entombed in Unknown Graves", which then spawns forth a zombified rhythm worthy of Left Hand Path or Scream Bloody Gore. The band is not above the use of some clean guitars for atmosphere, proven in the bridge here, and this careful balance of sorrow and agony persists throughout the entire album. Some songs are more melodic in nature, like "Retaliation", but the majority attempt to murder you from the past, with crushing and timelessly proven rhythms as you will find in "Seed of Hatred" or "Beyond the Threshold of Death".

Should you seek out Lifeless? If you are fond of albums like Left Hand Path, Scream Bloody Gore, Leprosy, or perhaps the first few efforts from Asphyx, Atrocity, Grave, Unleashed, and Dismember, then it is very well worth a go. New ideas are not the bread and butter of this German band's existence. They are fond of the past to a fault, and they intend to let you know it! Whether or not you can listen past the derivative vibrations being cast forth here and simply enjoy more of the same will directly correspond to your direct enjoyment of its cryptal, festering contents. I had a good experience listening to this record, but I am very unlikely to invest more time in it when I can simply tiptoe over to my CD rack and snatch any of a hundred better examples from the period in question.