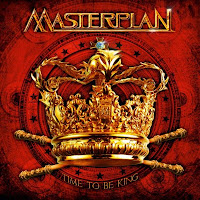 After taking a hiatus from the band and being temporarily replaced by Mike DiMeo of the legendary Riot, Jørn Lande returns to his German super group Masterplan and all seems to be well. The rest of the usual suspects are present: Roland Grapow (ex-Helloween), Axel Mackenrott (Beautiful Sin, live with Gamma Ray), Jan-Sören Eckert (ex-Running Wild, Iron Savior), and Mike Terrana (of at least 438 bands including Rage, Savage Circus, Axel Rudi Pell, Squealer, etc) and the lot have once more set about to prove themselves in a world already armed to the teeth with talents of this genre, many of which the Masterplan members had once partaken of.

How you view Time to Be King is really going to depend on how much you love Lande's vocals, whether they be in Ark, Allen/Lande, Jørn, or his many other past and present projects. His sinewy presence, a mixture of Gillan, Coverdale and Dio is humbling and charismatic, ever the stark contrast to the more shrieking power metal vocalists of our times, and yet still capable of a wide range of emotional impact. The rest of the band, as talented as they all are, don't exactly distinguish themselves through any unique traits, so he's truly the focal point of this experience as he is on almost any other record he has participated (save possibly Ark). For a top shelf, professional power/progressive metal act like Masterplan, he is the perfect fitting component to elevate their writing just above the wide swath of mediocrity that many modern bands of this nature unknowingly play themselves into.

It's your stock modern power, with a heavy use of Mackenrott's keys to provide both sweeping atmospheres and gentler, 'classy' piano lines that serve to balance off the power chords. Though I have no doubt Grapow was crucial to the composition of these tracks, I feel like he is largely wasted here. Very few of the riffs induce anything beyond solidarity, their shifting patterns used against the keyboards to create almost all of the record's mood changes, which are few and subtle at best. The solos also suffer from a feel of useless. They exist. The man can play. They are not well written so much as placeholders. Rarely do the songs feel generic, but so too do they rarely feel more than a passing curiosity, without any real displays of elegance that resonate through the memory. A high level of production standards and an enormously seasoned rhythm section can only get you so far, without the sinking hooks there is naught but fire and flash, a puff of smoke and a quick exit from the stage for the magician.

However, if you simply want to rock to something brainier than the average sludge, grunge and retro chord wielders of the day, you will certainly find yourself banging along to "The Black One", the snaking, nu-groove anchored "Blow Your Winds" and "The Sun In Your Hands", all dowsed in scintillating synthesizers and bombastic but forgettable guitar rhythms. "Under the Moon" stood out as the true pinnacle of this record, an atmospheric mood piece with truly benefits from Mackenrott's orchestration and a slow elevation towards climax, which is then broken into a choppy prog metal groove. If you fancy Lande's solo work, this is definitely one to listen for. "Far from the End of the World" is also a strong point, with some flighty melodic guitars and a pumping bass that transfix the ears as Lande balances out the eminent keyboard work.

A line-up like this is rarely capable of giving anything less than a professional effort, and thus Time to be King succeeds solely on its star power and vocal performance, with a few tracks in which the music really backs the hype. The material is fully consistent with the previous efforts like Aeronautics, but I feel like each of them had better songs than this one. If you're a fan of Masterplan, At Vance, Domain, Jørn, Edguy and Avantasia, then you will likely devour this too, though for how long I cannot say...