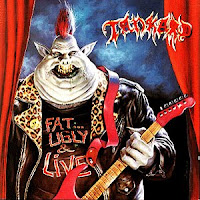 As a teenager who got to see many of his 80s metal heroes perform live during their Golden Age period, I have always lamented the fact that I could not count Tankard among them. Opportunities have arrived through the years where I might have taken a flight to a European festival at which Tankard were performing, and for whatever reason (lack of budget, other obligations) I have not been able to capitalize. So a live album/DVD is about as close as I have yet gotten to seeing one of my favorite thrash bands on stage, and to this extent I may be a little more forgiving of Fat, Ugly and Live than I might otherwise feel.

By the point of its release, Tankard had released four albums, the most recent being The Meaning of Life, which didn't really go over well in the metal community, though it arrived a few years before the big wave crashed and died against the shores of grunge. I don't really know where the line is drawn for where a live album should realistically become a possibility, since it is possible a band could perform a single album in its entirety with a lot of energy and good recording equipment, or a band with 30 albums could organize a shitty set and have bad production. But four albums and an EP seems a reasonable minimum to draw from.

Fat, Ugly and Live is not an isolated event set to tape. The recordings are taken from a number of shows performed in Frankfurt and Bochum, and they all sound pretty good. Perhaps not the brightest audio I've heard on a live offering, but most importantly you can hear the thrust of the guitars in full force, which is important since they often play at pretty high speeds with riffs that were more technical than your average thrashing band in the day, and especially important with some of the selections found here.

The biggest bones I have to pick with this release would be the lack of some of The Morning After's very best tracks..."Commandments" and "Shit-Faced". I can only assume the band was burnt out on playing these favorites by the time they started touring for The Meaning of Life, but it still seems like a MASSIVE oversight not to include them, as they are the very best and sure to get the crowd going rampant. Now, I realize that these songs were probably included in the actual sets, and perhaps just not sounding good enough to include with this live album, but the loss is clearly felt. The Morning After is, in fact, very much underused here, aside from the title track and "Mon Cheri" which is included as a part of track #12, the medley.

The Meaning of Life fares better, which makes sense since they were touring for it. You get the title track, "Beermuda", "We Are Us", "Space Beer", and "Wonderful Life" included within the medley. These tracks sound particularly impressive, especially "The Meaning of Life", as each note of the ripping guitars is pretty clear through the audio. For older material, we get "Total Addiction" and the title track off Chemical Invasion, with "Alcohol" and "Puke" incorporated into the track #12 medley. Zombie Attack is represented by "Poison", "Mercenary", "Maniac Forces" and "(Empty) Tankard", so no lack of material there, with the stunning exemption of the title track, which one would think as a surefire staple to be included on any live set. Alas, the same omission here as might pertain to "Commandments" or "Shit-Faced". A little surprise is that the Alien EP is represented here by "Live to Dive", which is a good song.

For what it is, Fat Ugly and Live sounds decent and as its my only Tankard live album, I do cherish the chance to crank these songs in their live incarnations. The same drawbacks apply here as to the majority of live albums: the songs are played pretty straightforward, you've already heard better studio versions, and you're not likely to be bowled over or surprised by anything. The lack of some of the band's most infamous songs from this track list does not really mar the fact that the other songs are pretty good and sound such in the live environment, but I can't think of any ultimate Tankard live offering without them...so this is an average and acceptable release if you're collecting the band's works, but otherwise, if you're new to their sound, head straight for the studio efforts, in particular the first four albums whose contents comprise this exhibition.