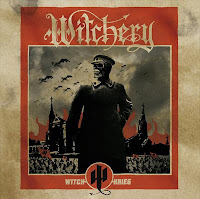 Considering the relative dip in quality the Swedish black/thrashers took with their third and fourth records Symphony for the Devil and Don't Fear the Reaper, it was perhaps a very good idea that the band go on a coma, from which possibly never to return. Well, the seasons have shifted and now Witchery has, in fact, begun to fan the flames of their staked exile and deemed the time ripe to once again conjure up some mayhem. In this crusade, they are joined by a new, horned countenance on the microphone, Erik "Legion" Hagstedt, who once worked with Swedish cults Ophthalamia and Marduk. He replaces the recently departed Toxiene, and the difference is like night and day, but not without a bit of intervening afternoon gloom.

I always found Toxiene a little understated in his rasping approach, in particular on the band's earlier albums, but regardless it worked very well within the band's overall milieu. Legion is sort of the opposite, his vocals seem deeper and more full-bodied, roaring over the Jensen riff attack like a fleet of winged monkeys en route to fucking up the lives of a pig-tailed girl and her mixed company. At times, I almost felt the vocals were overbearing and felt like they were in another dimension to the music, but in other places, it really works wonders, creating this vast nightmare feel to what would otherwise be some rather stock thrash/death/black metal.

Sadly, the riffs are where Witchkrieg once again fails to muster up the forceful energy of the past efforts like the miraculous Restless & Dead. They're biting and forward, and comparable to the work of the past two records, which were less than spectacular. It's pretty telling when a slower, groove monolith like "The God Who Fell From Earth" can steal the attention away from the more crazed material like "The Reaver" or "Witchkrieg" itself. I also felt like a few of the tracks veered too boldly into a black/death sound, like "Wearer of Wolf's Skin", which is just not something I really expect or desire from Witchery.

There ARE exception, however, in which the songs summon adequate riffs to turn the head towards its downright, banging position, like "Conqueror's Return", which successfully segues from a ballistic thrashing force to a big groove sequence. "From Dead to Worse" and "Hellhound" were mildly entertaining, though a few of the blockier, bruising cuts in the depths like "Devil Rides Out" and "One Foot in the Grave" were less than compulsory. The vocals on "Witch Hunter" range from annoying to wretchedly atmospheric, but the limited edition bonus track "Hung, Drawn and Quartered" is arguably the best song on the entire album...I wonder why it wasn't included as one of the core tracks. Perhaps it was just recorded too late.

As a little gimmick and a tribute to some of their favorite bands, Witchery have thrown together a roster of guest soloists here including Jim Durkin (Dark Angel), Kerry King, Hank Shermann, Gary Holt & Lee Altus (Exodus), and the almighty Andy LaRocque, and it's pretty interesting to hear how they all apply their distinct styles to the leads, but they don't exactly shine through as more than fluid within the Swedes' imposed frameworks. I'd be lying though if I said i didn't think it was a good idea...

Ultimately, Witchkrieg is a superior effort to the previous, lifeless Don't Fear the Reaper, where Witchery's good intentions to invoke a memorable hybrid of thrash and black metal went to die in a fire. Yet it doesn't even hinge on the success of their first two albums at slutty graveyard thrusting riffs and faux diabolic diatribes, and winds up just a smidgeon shy of 2001's Symphony for the Devil in overall quality. You can have a good time with a number of these tracks, but in the end they all feel rather disposable. The statement made by one of the band member's that this was a better album than anything they'd previously released is quite far from the truth (happens more often than you'd think). As for Legion, he is not necessarily better or worse than his predecessor. It's good to see him in action again, and he's a pretty reliable choice, but might take a little more time to gestate within the band's core sound.