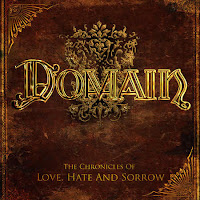 When we think of classic German power metal, we almost always default to the internationally successful acts like Blind Guardian, Primal Fear or Helloween, blissfully negligent of the vast swards of talent from which such acts have spawned. There are honestly scores, if not hundreds of such bands coming from this resilient land which approach their career with as much vigor, professionalism and craft as the bigger names, and one of these, boasting a 22+ year career is Domain, formed in 1988 and now nine albums deep. This is a band borne of hard rock and traditional metal roots which has slowly grown through the ages into a heavier sound that balances tight, tasteful power with cautious plots of shredding.

They also make a strong use of the keyboard as a central instrument, and Erdmann Lange's endless arrangements of organs and softer ambient string sounds lend The Chronicles of Love, Hate and Sorrow an expansive nature that some might consider to border on the side of progressive, though the writing is almost without exception rooted in the larger than life, driving metal anthem. Other excellent performances on the disc include drummer Jens Baar, who can measure up for a standard rock beat ("Angel Above") or jackhammer his kit into oblivion if the need should arise ("Sweeping Scars"). Axel 'Ironfinger' Ritt is the core of the band, and the sole original member, with an immense ability for classical shred that manifests often here ("Circle of Give and Take", "He's Back" and "Digging Their Graves" are all good examples of his leads), but never so often that the song should suffer at the expense of flashiness.

In fact, I am far more impressed by Ritt's rhythms on the albums than even the solos, for Domain has this uncanny ability to stretch the conventional into something fresh and polished. Whenever a riff bordered on the familiar, some grafted mutation almost always manifested to sate the soul's thirst for something emotive and unique. There's a new singer on board for this album, Nicolaj Ruhnow (of some lesser known bands like Irony and Subsphere), and his tone feels reminiscent of a James Labrie, only denser and more capable on the low end, forsaking Labrie's girlish whining. The combination of Ruhnow's voice and Lange's synthesizer gives The Chronicles of Love, Hate and Sorrow the feel of some epic clash between At Vance and Dream Theater, assuming all the strengths of those acts. To top it off, this is a concept album based on the poet Johann Wolfgang von Goethe's autobiographical novel "Die Leiden des jungen Werther", or 'The Sorrows of Young Werther'.

I don't often hear an album that can run for over an hour without a single weak, distracting track, but Domain are just that consistent in 2009. "The Last Dance" is a favorite for the texture of its desperate momentum, as backing vocals weave in and across Ruhnow's central beckons, and the thick, incessant riffing anchors the subtle, glowing synthesizer bank. "Angel Above" is a juicy, melodic rocker which immediately conjures up nostalgia for keyboard heavy 80s radio metal (i.e. the earlier Domain records), the guitars restrained and burning below while Lange has a field day synth-surfing the cheesy, heavenly crest of the wave. "Sweeping Scars" and "He's Back" are exercises in sheer power and ability, ever mindful of the atmosphere these instruments can produce when leveled in conjunction. "Circle of Give and Take" is another highly memorable piece, with bassist Steven Wussow stepping up, fingers strutting beneath the more brazen elements of axe and keys.

Having a limited exposure myself to this band's history, primarily with their 1989-91 material Before the Storm and Crack in the Wall, I was very pleasantly surprised how this band has managed to keep up with the times and not sacrifice any of its fundamental love of the genre. The Chronicles of Love, Hate and Sorrow is not some ultimate, screaming triumph of its form, but a measured and mature effort well worth a glance if you're fond of German contemporaries like At Vance, Nostradameus or Avantasia/Edguy (the older albums), or American acts like Kamelot and Symphony X, though the loving artifice and engaging performances here easily trump most of these. Busy, blustering, and cognizant of the listener's attention at all points, this is an album that will easily survive a large number of spins in your equipment.