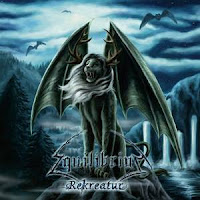 Any dork with his head far beyond the borders of Eberron, Mordor and the Forgotten Realms will probably understand me when I say that I spent a good 10 minutes musing over whether the creature on the cover of this record was more of 'dragonne' or 'peryton' stock, and I mention this for a reason: this is epic, charging metal that is mostly going to appeal to fans of epic fantasy, folklore, role playing games (console, computer, tabletop, or...live action ewwww). That is hardly rocking the boat in Equilibrium's case, because this German band are known for their attraction to synth-dominated anthems of battle. If you don't appreciate this variety of escapism, then this might be the sort of album you want to stay far, far away from, though it certainly has numerous other qualities.

The band knows how to make the listener feel like he's about to rush on foot or horseback down the nearest hill towards his enemies, and this is manifested through the band's galloping, melodic death metal thickly glossed in keyboard herald-horns, but they often go for what feels like a cheap, familiar glory. However, the complexity of the guitar work, the growling vocals and the never ending streams of synthesizer dress the overarching chord patterns in just enough to freshen it with a pinch of compulsion. The lyrics and titles are once again in German, and to this I tip my helm with some measure of respect, since the band's popularity is long past the point at which they'd start converting to English if they were hell bent merely on claiming the epic folk/battle metal crown from other, lesser acts. However, in ANY language, a song titled "Fahrtwind" is about as necessary as a Jar Jar Binks, even when it's not a joke...

If you enjoyed the band's last effort Sagas, you can jump right in here, because it feels rather on the level with that. If anything, tracks like "Der Ewige Sieg" show an increased devotion to the use of more progressive influence in the guitars and keys, though this is not really anything new for melodic death metal. So many of the songs exhibit the same majestic, charging atmosphere that it can be difficult to pick them out, but I really enjoyed the barbaric bombast of "Verbrannte Erde" which traveled a slower route, and the hyper melodic "Der Wassermann" which would have had me clutching my esophagus in disgust if not for being so damned flowing and catchy. Both of the longer track, "Aus Ferner Zeit" and "Kurzes Epos" both contain enough dynamic alteration within their parameters that shouldn't be too put out listening through them, if you don't mind a ton of gang choir vocals or silly goose female vocals that often follow the melodies.

Rekreatur did not have a major impact on me, and I'd say I preferred the last album Sagas to this, and perhaps even the debut. By this time, though, if you haven't already written off the band as simply hollow, dork metal fare, or if you worship the sounds of Bal-Sagoth, Turisas and Finntroll, then you probably represent the type of bloke that will appreciate this, even if just for a few frothing mugs and laughs around the war gaming table Friday night.