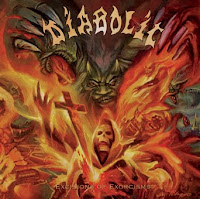 Florida's Diabolic might just be the perfect example of how 'too much of a good thing' can eventually lead to the marginalization of a band within a musical genre. Through the band's history, they have released some half decent, stock blasting death metal like Supreme Evil and Subterraneal Magnitude, but because of the saturation of such music in the 90s through the 21st century, they never really found the same market presence of their influences like Deicide and Morbid Angel. After a few years' hiatus in which the band released only a few EPs, they return here with their 5th full length Excisions of Exorcisms, which might as well be called 'Business as Usual', since it grasps straight at the band's primal, blasting old school horns and wrangles them into the present.

The central premise of this band has always been Aantar Lee Coates beating on his kit like an abusive stepfather while the guitars rip out pure, one track blasphemy in the vein of Vital Remains, Sinister, Immolation and Deicide. The band has a similar sound to Maryland's Pessimist, minus the black metal elements and that should come as no surprise here since Kelly McLauchlin is one of the guitar players here. The leads cut through with a carefully measured vitriol typified by the Florida forefathers, and for the most part the band simply doesn't feel like slowing or stopping.

That's a good thing here, because where the band does morph into sluggishness, i.e. "False Beliefs", there is often a little less impact. "Entombed" and "Fragmented Kreation" fare slightly better, as they mix tempos and offer some more palatable, grisly riffing. The faster fare, however, ala "Excision of Exorcisms", "Venomous Habitations" and "Evil in Disguise" is the true sacrificial heart of this recording, as they blast the listener into submission and force upon him the ebbing, gradual hypnotism of the guitar patterns. Being blunt here: aside from the occasional surprise and the ghastly flow of the leads, I did not find enough of the actual writing to bewitch me, and after a number of listens I feel content in abandoning the record back to the hellish ages from which it was spawned, possibly to visit once more if I'm ever in the need of some sheer blasting mayhem with little regard for nuance.

I doubt Excision of Exorcisms will stir up much further attention for this decade plus veteran, but it's a solid and grounded effort that maintains strict loyalty to the band's back catalog. The mix is great and the musicians sound unstoppable from an energy standpoint. Sadly, that just wasn't enough for me this time, and while I have no major complaints whatsoever, the music simply doesn't call to me like a lot of other old school death. Listeners new to the band would be better served by checking out their earliest efforts, which reek of a slightly superior evil atmosphere, but die hard adherents of the first four Diabolic records probably would not be disappointed by the infernal transgressions placed upon this particular altar.