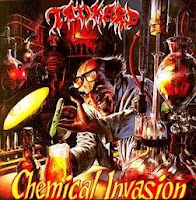 Chemical Invasion is Tankard's second album and the tasty vanilla stuffing at the center of their career Oreo cookie. Granted, I may be one to appreciate the crisp, outer chocolate shell more than the filling, but to be fair, one slice of the tongue alongside the softer contents within only helps one better savor the cookie's exterior, and I feel like this album would make the perfect primer for the following epic The Morning After. The same frenetic pacing applies here, with fast and explosive, riotous riffing that elaborates on Zombie Attack's punk fervor with an upgrade to the band's technical whims. For half the record, you feel as if Venom has been put on fast forward, bluesy NWOBHM-like riffs being threaded through the thrusting, sped mute warpath the band traverse with little effort.

If you've already heard Zombie Attack, then you'll recognize this album's similar 'looking for trouble' attitude. Each of its compositions gives the impulse to pound some street turf, looking for a rowdy bar or a post-soccer party with all intentions to wreak havoc and hopefully go home with somebody else's girlfriend. You could use this as great workout music while you try and comb out that mullet. It could also score a rugby match or demolition derby. It's the brand of fashion free, testosterone induced mayhem that feels right at home in its decade of release. There's no latest edition of ProTools, Facebook or MySpace to protect your image. Go in the studio, be yourselves, knock out some songs and kill it.

With Chemical Invasion, not only do Tankard kill it, but they bag it, tag it and delicately place a cask of its favorite, potent brew in the casket to help it death with its new life in the underworld. Before you can even raise your prohibition picket sign in protest, the band has already fucking clobbered you with "Total Addiction" and "Tantrum", head-spinning anthems to moshing and beer that feel as if the band were flying high off some jet fuel enema. "Don't Panic" teases you with a slower, classy NWOBHM-on-crack rhythm before once again thrusting against the sound barrier with a killer riffing segment that culminates in a fairly complex mosh breakdown (at least for its day). "Puke" is under a minute long, but nonetheless packs in some hyper-punk rhythms and a great, acrobatic guitar rhythm early on.

Next the band takes a turn for the unexpected, with a 7+ minute instrumental "For a Thousand Beers" that travels from brooding acoustic tones and slight, swelling string ambiance to a cautious, doom-like crawl and then finally the riffing intensity you knew was just hovering on the horizon. I do feel like there are enough quality guitar parts in here to write at least two separate Tankard tracks and apply vocals, and I do feel like this album might have benefited overall from its absence, as it throws a wrench in the works of the band's hyperactive pacing. But this works both ways, and in truth, at least for a moment, it gives you a delicious pause while you savor whatever concoction you're clutching.

The band returns to its blinding, raunchy speed through the title track "Chemical Invasion" and the blistering frenzy of "Farewell to a Slut", a rather scathing indictment of one of the 'finer sex', or in Gerre's position not the finer sex. "Traitor" once again stretches the patience, nearing 8 minutes in length, but this time it's got vocal presence and tribute to drinking and thrash metal aplomb, so the time moves pretty quickly even if it's not the best song on here. The album is closed off with a cover of the great Boston hardcore band Gang Green's "Alcohol", and it's good to hear the Germans cover such a kindred spirit (I highly recommend you track down the original band for some quality hardcore punk) and put their filthy spin on the proceedings.

Not a lot of complaints here. This is a dirtier sounding record than many Harris Johns would produce, but as usual, I find it infinitely compelling and natural despite the clinical straightness. The lyrics are brute and silly but perhaps to be expected, as the band were likely still developing their English skills. The two longer compositions ("For a Thousand Beers" and "Traitor") do have some slight flaws that put them at odds with the surrounding mayhem, but they're still chalk full of swell Tankard swill and I have never felt the urge to skip them when listening through. Perhaps one could argue that the album has too much of a 'blitz' feeling, which can grow repetitious if you're not expecting it. The same was said often of Zombie Attack, but I don't have any problem with this notion whatsoever, because I have never gone into any of these old Tankard records with the intention of finding anything other than 30-40 minutes of onslaught and innocent hilarity. To that degree, Chemical Invasion is well worth a listen, and one of the better gems of the German thrash/speed explosion in the 80s, even though its closest siblings are superior.