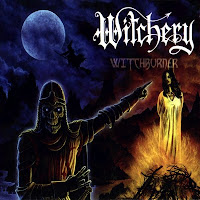 Witchery's debut Restless & Dead was both a wake up call and a blast of fresh grave soil, taking the reins of the black/thrash sub-genre directly away from the current lordly practitioners like Bewitched and Swordmaster and finding greater success abroad. It was clear that there would be some legs to this project, which in one album blew away the combined output of some of the members' previous bands (Seance and Satanic Slaughter), so the Swedes issued this EP in order to sate the thirst for their sophomore album (which was due out in October 1999).

What better way to do this than gather some safe covers that most metal fans can relate to, with a few spare originals that probably weren't going to be good enough for the next full-length? Thus, the Witchburner EP was born. But what I didn't expect is that the covers were going to be quite this good...and really, they make this release worthwhile even more than the band's own new material, though that does not disappoint either. The cover choices are all rather obvious: Accept, Black Sabbath, Judas Priest, W.A.S.P., card carrying deities of the metal pantheon all, but Witchery's carefree, give a fuck attitude of blazing guitars, and the strangled kitten cornered in Toxiene's esophagus all lend themselves very well to their interpretation. Of the four, "Fast as a Shark" and "Riding on the Wind" are the strongest, with "Neon Knights" coming in a close third. They're all played pretty straight, with the obvious scaling in production values at the dawn of a new century, and the predicted difference in vocal styles, and yet Toxiene does attempt to put a little more 'spice' into his haughty snarls and barks, easily rivaling his performance on the debut. The cover of W.A.S.P.'s "I Wanna Be Somebody" is reasonably fun too, I simply just don't care for the original as much as these others.

As it turns out, the band's own new material would also be greater than expected. In particular, I really enjoyed "The Executioner", with a thrusting rhythm that almost rivals "The Reaper", and some killer hooks cycling through post-verse, though the chorus in this song is nowhere near as catchy. "The Howling" keeps up the pace, Sharlee D'Angelo's bass striding along below a meaty Corpse/Jensen thrashing, and a fine bridge rhythm. The final track on the EP, "Witchburner" itself is a more brazen, choking, raw composition, but force enough remains within the guitars and Mique's drumming to behead any vile Wiccan who preys upon the hapless, and the riff breakdown at about 2:35 is just fucking awesome...

Witchburner is 25 minutes of the same reckless attitude and roots metal aesthetic that pervaded their flawless debut album, in a tight and spry package that should have even the most hardened headbanger romping about the room breaking glass bottles and injuring himself. I'd like to point out that though Witchery were (and presumably still are) a 'retro' band in that they mesh old school thrash and speed metal ethics with a black, snarling throat, the band is largely successful because they play it STRAIGHT. As cliche as some of their imagery and lyrics are, they do not fuck around by reciting the 'thrash' mantra in the lyrics every other passage, a lesson I wish half of today's pre-pubescent Exodus/Tankard worshipers could have sat in on. I know you want to be funny. Play it straight, thrice damn you! It's always going to end up funnier that way (and timeless). Witchery has their finger on the trigger here, and this is a tasteful series of bullets that will impress anyone who enjoys Restless & Dead or the following Dead, Hot & Ready.