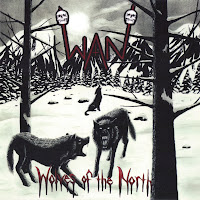 My first impulse when hearing the debut of Sweden's WAN was to mentally write the trio off as yet another in an endless procession of Hellhammer, Mayhem or Bathory derivatives, and to be truthful, the influence of these two titans is clearly felt through the enormity of Wolves of the North. However, once I settled to this fact and let the band work its slow, churning rhythms upon me, I once again admit to having succumbed to the 'not broken, don't fix it' cliche. WAN do not offer anything new, and in fact they revel in the archaic sounds of yesteryear, offering the bare minimum in production, extremely primal and crude riffing, and vile, stretched vocals which bring to mind a more reserved Quorthon.

The catch is that this style, though beaten to death by thousands of tributaries in a wave far larger than any created during the actual lifespan of the bands that inspired it, still has something to it which thrills my ears with hints of both mystique and brutality. WAN have crafted 13 tracks for this debut, and they range from a punishing, steady speed to a slower, more atmospheric motif. I am alternately drawn back to the days of Under the Sign of the Black Mark, The Return, Blood Fire Death and Apocalyptic Raids, but then there are some outsider tracks like "Rise of the Antichrist" which feels like a metallic interpretation of Gustav Holst's "Mars" before the drawling, black/doom guitars ooze forth.

In swifter territories, tracks like "13 Sons of the Devil" and the brief "Rapid Satan" blast by like wolves pressed in on their prey, while "Med Stormsteg Mot Döden" makes for one of my choice moments on this record, a tightly wound black/speed rhythm which parts for atmospheric chords, all the while riding the icy stream of momentum. But the band's ultimate strength dwells more towards their slower geography, like the sobering, grim "Ulvhäll" which requires little more than a simplistic repetition of lumbering chords and half-spoken, weighty narrative vocals that transport you to snow-shrouded forests and mountainsides. "Wargoat" deserves mention for its Hellhammer-ing, and the bleak "War of the Unholy" is a similarly addictive crawl through blood and slush.

My recommendation is that fans of the originators of these sounds, whether that be Hellhammer, Bathory, Celtic Frost, Venom, Mayhem, Burzum or Darkthrone, who are open to further visitation rites to their unhallowed proving grounds, give Wolves in the North a chance to breathe some renewal of ancient hostilities into their spirits. It's little more than a loving nod to its influences, but its well crafted and loyal to a fault, worthy if you're seeking a cold escape from the maggots and body heat of the disgusting civilization surrounding you.

Could this shit get anymore derivative? You're being too nice to this album.

These are the same thoughts I had when I first started listening to it.

Give it a chance. It's not great or even that good, many bands did it better and many others do it better,
but I think there's some stuff in there that you, of all people, will actually enjoy.