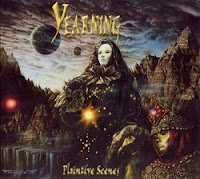 At least for their first three records, Yearning were surprisingly adept at acquiring cover images/art that stirred both the imagination and the desire for the band's graceful calls of woe. Plaintive Scenes is their sophomore effort, and quite fascinating on the surface, with the possible exception of the logo choice, which sticks out a little. Still, I'd be lying to claim this were anything but an attractive digipak, even despite the band's awkward picture posing within. The faces are powdered and prettied, but it seems a number of the members don't want to be there, save the shaven headed drummer who seems right at home in his chosen posture.

The contents of the album are equally fantastic, as the band had undergone a slight transformation since the epic anguish of With Tragedies Adorned. Not so much of lineup, as the band did not lose a member here so much as gain one: Lady Tiina Ahonen, who performed the session flutes on the debut, became a more permanent fixture for this effort, and the group is joined by another session musician, Hensku on the oboe. Stylistically, it picks up where the debut off, but transmutes the band's joys and agonies into a denser, more freely flowing progressive fixture varied enough that this might just be one of the best things your average Opeth fan has never heard of when seeking out sounds similar to his/her select Swedish pantheon.

If anything, this is a more Romantic outing, as proven through the rapture of the opening track "Naïveté", in which Juhani's improved, soothing vocals are joined by a calamity of proggish synthesizers, lamented guitar lines, thankfully near-mute faerykind vocals, and a glorious, crashing momentum that survives all its meandering visions. "Unwritten" is a natural conclusion with some schizophrenic twists courtesy of a mass asylum exodus under a full moon, becoming ever more beautiful as the passages wind and unwind, the guitar twisted through chugs and strong open chords while the 'orchestration' transfixes the mental eye to a wave of euphoria. "Grey" is more playful, with a deep vocal line that hides behind the churning of the chords, resonant clean tones and the shimmering of sparse bands of tiny lead melodies.

Speaking of twists and turns, "Soliloquy" is one of the choice moments on the album, through its spiraling mesh of beautiful acoustic guitars, excellent vocals that prove Juhani had come a long way from the debut, and mesmerizing guitar melodies that are quite easily the equal of anything on Opeth's Still Life (a great album, don't get me wrong). "Plaintive Scenes" starts with a raging melodic death metal line performed at mid-pace before the band ventures off into a bold, assertive lamentation; and "Soliloqui II" explores even more far-out territory, notably the mystique written into the guitars and the dual vocal breakdown that erupts around 2:50. I did not hear that coming! "Eyes of the Black Flame" is another success, with a beautiful flute line cast above its graying synth lines, morose vocals stretching off into suffering strings. The closing instrumental "Nameless" is likewise pretty epic, the band using its typical broad strokes to balance glorious, almost 80s new wave pop synths over slowly chugged guitars and a massive synthesized downturn.

Before listening to this record this week for the review, I held this about level in quality with With Tragedies Adorned, but clearly its increased complexity and vision render it somewhat more valuable in the long term. The debut did have a few songs that felt ridden with a few moments of filler, but this is quite astounding throughout, even if its ingredients are not the most catchy individually. Now I'd have to recommend a microscope to see the very fine thread by which this hangs below the following Frore Meadow. If you're in the market for some classy, progressive Gothic/doom metal, there are few efforts in the past decade I would recommend more swiftly than this.