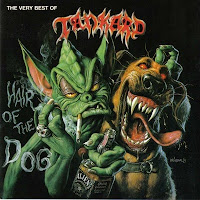 Hello folks! Larry McRecord-Exec here, to tell you we've got a new product available on the shelves! You may be aware we've got this kickass German alcoholic speedster act on our roster known only as Tankard. They've released three albums so far, each worth its weight in hops and suds, and all still READILY available on the first and second hand markets! Yes, Zombie Attack, Chemical Invasion, and The Morning After are all available through our catalog, but I'm here to tell you today that after spending your hard earned coin on these, the next obvious step is to purchase our new release Hair of the Dog: The Very Best of Tankard, which repackages 10 select tracks from the three albums you have already purchased, and offers them to you once again...

What's the catch? Well, no catch at all! These 10 tracks have been carefully hand selected by our top scientists after hours of research to provide you with the maximum inebriated FUN. We've implanted sub-sonar signals onto this new CD which will enhance the % proof of anything you are currently drinking, and our historians have placed them in an order most likely to incite riots at the local futbol match! We will stop at nothing to ensure your enjoyment of our product, and we have spared NONE of the three prior albums in its selection!

We've returned to the horror camp and street mercenary attitude of Tankard's debut Zombie Attack to include three selections: "(Empty) Tankard)", "Maniac Forces" and "Zombie Attack" itself! Get your popcorn kids, and watch as the mayhem ensues. Sound familiar? Of course not. Chemical Invasion is represented here with "Don't Panic", "Tantrum" and "Chemical Invasion", since title tracks have GOT to be the best on their respective albums. Last but certainly not least, the drunk thrashers latest opus of swill, The Morning After is here in force with "Shit-Faced", "Commandments" and yes, you guessed it, "The Morning After". But the fun doesn't stop here, because right now, for a limited time only, we've include the title track "Alien" from the Alien EP! Just ignore the fact that you could purchase that EP and have some added, non-album bonus material, and snatch this up instead. Better yet, snap both up!

All of this is available on compact disc for your audio pleasure, with a freshly featured new cover image that might have served better on a new studio album. But we'll never know now, will we? Our operators are standing by, so why pay for three albums and an EP when you could pay for FOUR albums and an EP and have exactly the same amount of material. Rape kits not included, but we can add them for a fee. Order now!