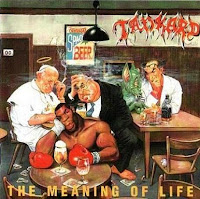 Retrospectively, it's always interesting to examine the career of any long time band and ask yourself when and where, if they had stopped, they could be considered a flawless 'artistic' endeavor. Maybe we think of Sabbath an album or two before Ozzy would depart (or Dio's departure). Maybe we think of Metallica up to or including ...And Justice for All. Maybe Judas Priest, before they hired the man who tries to hard to replace a man who is almost always hard. When I think through the cumulative output of Germans Tankard, I feel like that 'point' at which the shark was in danger of being jumped came in after The Morning After, or maybe the Alien EP. If the band had called it quits then, they'd have left a nigh spotless legacy.

But Tankard has persisted, and continue on even today. To be fair, they've released some good albums since their epic youths. But there was simply no real possibility of topping The Morning After. It was fast-paced folly with intense songwriting, like one nuclear burst after another at an Oktoberfest, and made all the more memorable by the band's innocent if inebriated wiles. The Meaning of Life had the unfortunate and daunting task of following up that monstrosity, and it truly failed to measure up in most categories. The riffs were as crunchy, but not as good. The vocals were a little more melodic, but not as good. The production was possibly better from the argument of hearing the guitars better, but once again, just not as cool as the previous album.

If we were talking about some other band, this all might add up to a heap of mediocrity, but as it's Tankard, The Meaning of Life is still a pretty good attempt despite all of its younger sibling failure to live up to big brother or sister. The expressions on the faces of the Pope, Mike Tyson and Mikhail Gorbachev (?) on the cover say it all: The Morning After was really the night of vibrant, puking passion, and The Meaning of Life is really the hangover. But off to the right of the moping icons, the band's Chemical Invasion and Alien mascots are plotting something: this record does not have to be a complete waste of time, and it can still rip some corners of your face off like a quick trip to the pavement.

The Meaning of Life is stylistically not a large departure from the last album, only its a little louder and clearer. The band was still working with Harris Johns on this, and perhaps they mutually decided to enhance the sonic qualities that it might leap the hurdle faced by The Morning After in the face of metal fans and bands demanding higher studio values to go with the times. In 1990, thrash metal was still very healthy, with amazing records like Artillery's By Inheritance or Megadeth's Rust in Peace showing exactly what could be done with the genre when creative and technical skills collided, and Tankard was surely a hopeful among the German wave. But this album didn't really pan out for one reason alone: the riffs are just not as aesthetically pleasing as they were before.

The tracks are still busy and angry, and in fact, at their busiest, we hear the best material on the album: "Meaning of Life" is choked with intense, winding rhythms that constantly keep the attention span on edge as they trample through their variations, and Gerre spits his interrogations on that age old, elusive mystery: what is the meaning of life? The answer must be clear. This is Tankard. The meaning of life is to imbibe as much alcohol as possible and die in a blaze of vomit and glory, right? Yet, he never comes out and says this. "Wheel of Rebirth" is a track about a dystopic future in which our lives have been muted and nulled as if in some Orwell or Bradbury vision, but its glazed with some pretty nice speed licks and start/stop rocking. "Barfly" and "Space Beer" return us to the band's lighter lyrical fare, and both are pretty good hop stomping anthems with the visceral energy of the past few records.

You'll perhaps notice that the songs I've mentioned all occur deeper into the album than one might hope for, and this is another minor issue I had with this record. Tracks like "Open All Night" and "Dancing on Our Grave" are decent when compared with the majority of would be thrash bands exploding from the States and Europe, but for Tankard they're not really all that exciting, and these are the best of the earlier half. A number of tunes, including "Mechanical Man" and "We Are Us" are quite forgettable, and I wouldn't blame the listener for skipping right on past them. Fortunately, when you hit the title track the album becomes far more entertaining.
Another beef is that some of the lyrics on the album are just so mindless, drab and liberal in as far as they examine subjects like racism ("Always Them") and self-affirmation ("We Are Us") in such generic, wishful thinking overtones that have almost no grounds in reality. That's not to say the message is a bad one, just not that interesting when voiced like a brainwashed 3rd grader.

I don't think of thrash metal as some plebeian 'comic' genre of music like many younger thrash fans looking through a purely 'let's be like people before we were born' perspective, and truly almost all the best albums of the form (Master of Puppets, Reign in Blood, Bonded by Blood, Coma of Souls, Punishment for Decadence, and so forth) are dead serious for the majority of their run time, but Tankard is an exception, and I feel like their silly lyrics have always been their forte, whether that involve drunken states, aliens, zombies or all three. They've always slipped a few 'message' tracks in through their albums, and continue to do so, but on this album I felt a few were particularly hokey, and it diluted my enjoyment.

So, we are left with an album that's good for the majority, about 6-7 of the songs, and moderate at best for the remainder. That just wasn't going to cut it, and one might think of this album as the beginning of the end, or a mildly disappointing end to the band's opening chapter. The Meaning of Life is superior to Stone Cold Sober, The Tankard, and Disco Destroyer, the last two of which represent the band's true low point, and it's got enough spiky speed/thrashing to have the Tankard purist raging in his mug, but I felt a little frightened by the implication that this potent drinking machine had any chink in their armor whatsoever.