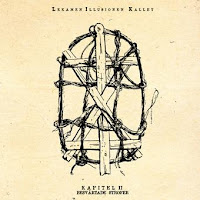 The second of Graav's solo efforts under the acronym of LIK, Besvärtade Strofer is a more polished and richly produced effort than the debut Må Ljuset Aldrig Nå Oss Mer, losing a little of that album's rustic charms to populate a more depressing, consistent field of moody rhythms and eerie but majestic vocals. At the surface level, though, there are some clear constants that have carried over from the first album. The spooky and fairly sparse synthesizers are mixed a little more loudly here, as are the very simple rock drum beats. A lot of the record seems to dwell between outbreaks of slowly charging metal riffs, but they're still conjoined to several of the album's more memorable moments.

The album runs in a few minutes longer than its predecessor, with one less track, and there are a few pieces here that would test my patience slightly like "Varulvsvals" and "Syner", which feel as if a little fat could have been trimmed from them. The other, lengthy piece "Viterskog" is haunting enough in its alternation between morose, occult doom with bleak vocals and the segment of flanged, clean guitars under which whispered, spoken narrative is spent, that one can very easily get lost within its turmoil and suffering. The metallic musings at the heart of "Syner" are reasonably cast, but not as interesting as the drudging ichor of Gothic horror that surrounds them. Ironically, the surge within "Varulvsvals" is the most exciting moment of the song, which seems a little too much of a drawl for its own good elsewhere.

"Prolog" is a thrifty intro piece, and I really enjoyed the depth of the clean guitar tone and its contrast with the whispered vocals and sprightly use of little organ sounds to create a pandemic of schizoid terror. "Åkallelse" opens with some more of the band's twanging, Western/folk hybrid pendulum before transforming to a driving Gothic rock force with some of Graav's more inspiring vocals on the entire album. The one other track is "Begravd (Epilog)", which is once again a guitar instrumental finale, like the first album had, though Graav has a few spoken lines after the 2:00 mark. This time, however, the guitars are cleaner and a little more adventurous as far as the patterns being repeated, and they really wrest a distance and emotional longing out of the listener.

It might not make much sense, but I feel the more refined and less 'hick' approach to Besvärtade Strofer lacks some of the charm of the original. Surely, many would argue that the tones of both drum and guitar here make it far more appreciable, and it doesn't lack for the debut's down trodden miasma of emotions, but I occasionally felt more bored with this incarnation of LIK. For what it's worth, though, the man can still weave some pretty desolate ideas into a tapestry of resilient and blissful torment, and those seeking out moody gray or deep blue architecture the likes of many minimal folk/black metal bands, or Graav's similar band Lönndom, might deem it worth the time and travail.