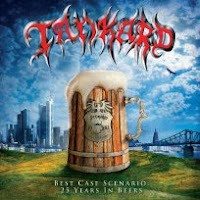 Tankard have had a pretty strong relationship with their latest label AFM since signing with them for the B-Day album and beyond, and this has reflected in the quality of the material, which in general has notably improved beyond the band's later Noise Records period or their brief stint with Century Media. So, when it arrived time to once again unleash a compilation of previously issued material, the band and label had the wise idea to re-record some earlier tracks with the current 4-piece line-up instead of just aping them directly from their original sources, as with the awful waste of space Hair of the Dog, Tankard's earlier compilation on Noise.

I rarely, rarely ever find these re-recording albums worth much, since I'm usually a sucker for the original versions, but at the least you get the feeling you have been offered something new, and since so many other bands have gone through this process, including a number of thrashers (Testament, Destruction, Exodus, etc.), then why not Germany's drunkest legends? The quality of the translation really varies, with some clearly lacking the exact spark that made the originals so special, and others actually improved a notch.

The Zombie Attack remakes I could certainly have lived without. Here they've done "Zombie Attack", "Maniac Forces" and "(Empty) Tankard", all long standing staples of the band's sets and arguably the more 'important' tracks from that album, though I consider that entire album a bloody perfect good time. The guitar tones here are pretty boxy, and I just don't like Gerre's vocals as much as I once did. "(Empty)" Tankard" probably survives the remake process the best of the three. Chemical Invasion gets two spots on the compilation: "Don't Panic" and "Chemical Invasion". Once again, they're not as ripcord wild as the originals, but I think these two come across pretty well in their newer incarnations.

The Morning After is sadly under represented, with only the title track. Once again...no "Commandments"? No "Shit-faced"? These are some of the band's best songs, and the remainder of that albums is likewise perfect. "The Morning After" itself sounds a little gimped, and I will attempt to forget the obvious omissions and move along. Tankard wisely included "Alien" and "666 Packs" from the Alien EP, which many people might not own, so this could be their first exposure, and of these, "666 Packs" actually sounds decent through its update. The Meaning of Life material actually sounds good here, I prefer the simple crunch of the tunes to their more hissing originals, and you've got both "Beermuda" and "Space Beer" to digest. The live "Medley" of "Alcohol", "Puke", "Mon Cheri" and "Wonderful Life" (from various early albums) that originally appeared on Fat, Ugly and Live is given a studio treatment, which is a slight surprise, but these songs are all better in their separate incarnations.

After this, the pickings a little more sparse. "Freibier" is the only track from Stone Cold Sober, but it sounds pretty good here, and Two-Faced gets a double play in "Nation Over Nation" and the title track, which don't sound noticeably superior to my ears than their original versions, but certainly do not depress. The compilation is rounded off with "Minds on the Moon", one of the better songs from the inconsistent album The Tankard, and that also sounds quite good with its new layer of paint. So 1995 was understandably the cut-off date for this project's material.

If you were lucky, and got the limited edition of this compilation, you were probably also treated to a bonus Tribute to Tankard compilation with 18 tracks, several of which come from underground thrash upstarts like Hyades. Far more interesting, however, were the covers provided by fellow Germans Paradox, Paragon, and Sacred Steel, who all did a decent job with the material, and Denmark's power/progressive band Manticora who seem almost out of place. Having this added disc certainly ups the value of Best Case Scenario, so if you're one of the Chosen ones, bolster my review score by about 15% (1.5 points).

Otherwise, there is not a lot of cement value to this release unless you've been with the band and really want to celebrate. A number of the songs do sound comparable or superior to the originals, but this is not so for the majority of the play list, in particular the first half. I would much rather remember the original, ripping versions of these tracks when they sounded pretty damn heavy. The cleanliness and modern punch do not always do them justice. But unlike Hair of the Dog, it's at least not a total clusterfuck if you drop some bread on it.