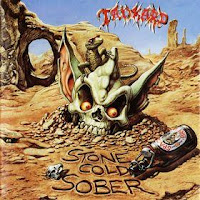 I seem to recall a bit of mixed feelings for Tankard's fifth opus Stone Cold Sober, which is confusing as this album is clearly nothing but the sum of the band's previous parts, another one way trip to the barroom floor after an evening of righteous excess and indignation. It's got the speed of The Morning After or Chemical Invasion, a slew of decent if maybe not enthralling riffs, and the lyrics are anything BUT sober, as the band levels the bartender with "Freibier", the great title track and a dose of "Blood, Guts & Rock'n'Roll". Perhaps it would be best to ignore all the fuckwittery out there and just be honest: this is a good Tankard record whose only flaw is a lack of real staying power.

I'm saying there is no "Shit-Faced" here, no "Commandments" and no "Zombie Attack", despite the best intentions of a fast paced flurry like "Ugly Beauty" or "Behind the Back". Some of the better tracks here put a slightly new spin on the material, like the winding rock & roll hyperactivity emanated by "Mindwild" or the uncontrollably, uncharacteristic instrumental epic "Of Strange Talking People Under Arabian Skies" that tapers off the record. However, you'll do just as well with the jawbreaking sledgehammer speed traditions of a "Sleeping With the Past" or the 'sequel' song "Lost and Found (Tantrum Pt. 2)".

As far as its sheer riffing capacity, it is "Stone Cold Sober" which might prove the one track to outlive its environment. The verse is pretty typical mid paced rocking Tankard, but it picks up into some fine speed-licks that pump and piss like a line of soccer hooligans at an after party. If I were to draft up a 'greatest of' playlist for this German national treasure, this would be the one tune from the album I would insist on including. "Freibier" and "Blood, Guts & Rock'Roll" make for a fun rundown to the pavement, but they're not quite as immortal. However, no critique of Stone Cold Sober could be complete without mentioning the hilarious cover of the J. Geils Band's "Centerfold", which sounds adorable beneath Gerre's navigation and the punchy transformation of the riffs, blunt chords replacing the original organ tones.

All of these elements add up to an entertaining burn of debauchery, just enough for you to wind up in a jail cell, though you'll get out in the morning with an appropriate hangover that causes you to conveniently forget most of the previous evening's festivities, other than the strange stains and random pieces of clothing you might be wearing. It's a little more brash than its underrated predecessor The Meaning of Life, and not quite so chalk full of riffing goodness as the following Two-Faced, but it'll do in a pinch, and with the beer goggles on it's a clear 7.5.