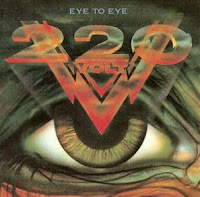 Perhaps the pressure of delivering three tight metal records, which ranged from 'good' (220 Volt in 1983) to 'great' (Mind Over Muscle in 1985) and reaching very little success rubbed off on the Swedish hopefuls, because when 1988 arrived the band had seriously gimped itself into just another common hard rock band struggling for the airwaves against a thousand other faceless acts trapped into short term, major label deals which would most often result in their undoing. That's not to say Eye to Eye is the shittiest album you've ever heard, because there are certainly far worse cases of a band treading the same raunchy path, but after Mind Over Muscle, one might have hoped that the band's legacy and upwards path would continue, transforming 220 Volt into one of the most raging metal forces in all of 80s Sweden!

Instead, you've got a very commercial flop here which at best apes some unlikely hybrid of Firehouse, Europe, AC/DC and even the groovier hard rock guitars of an Extreme into a digestible, but soon forgotten fast food course that you'd partake of en route to some more important event in your life. The line-up remains the same as their excellent 1985 effort, but all ambitions to progress and power forward into immortality were castrated and the flopping, sad eunuch that remains is worth nothing more than a cheap dispense at the nearest bargain bin. It's REALLY fucking ironic that the first song on this album is called "The Harder They Come", when in fact the band does NOT come hard whatsoever. This is friendly radio fare with a cool lick or two in betwixt the rather average chords and tremolo guitar line which closely resembles Dire Straits or AC/DC.

Sad to say, this is one of the better songs on the album, and most of the record consists of Def Leppard-like hard rock ala "Beat of a Heart" or the awful "Still in Love", which I'd expect from Winger much moreso than this once mighty Swedish platoon. I'll admit, I cannot think of a Europe ballad in the 80s that is more gimped than this one...not catchy enough to make or break the band, and not heavy enough to please those poor fans who appreciated the first three albums. When you're lucky, you'll get a track like "Money Talks" which at least has a decent riff or two among the shuffle of poor predictability.

In short, 220 Volt could have been something other than a Scorpions or Europe clone, using those influences favorably and proceeding from the time they showed such immense potential, but they instead traversed the descending path to many a drunken night, wondering where it all went wrong. We all remember those crop of hard rock MTV rotated shite hair band videos of the 80s, which often would choke up the programming of Headbangers Ball. Do we remember any from 220 Volt? No. Exactly! For even if the Swedes had been better suited towards this direction, they offered too little too late to appeal to the aerosol zombies that were sucking Bon Jovi and Bret Michaels records off the record shelves faster than they'd snub their poor boyfriends' advances while dreaming of their high-haired effeminate man-gods.

Now to light some incense in here, because this stinks!