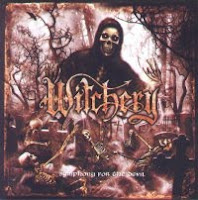 By 2001, Witchery was already a pretty huge name out there, having numerous tours beneath their belts and seeing a larger level of momentum than many of the members had experienced in their former bands. Expectations were now enormous in general, and the Swedish made a fair effort to suppress them with its third long player, a Symphony for the Devil, and a new drummer initiated into the scythe wielding ranks: Martin Axe, who has played also in Satanic Slaughter and Nifelheim (among others), and currently with Opeth. With their new skin smasher, and a clear, bolder production than either of the previous records, the band managed to produce an appreciable, but unmemorable album.

The major problem with Symphony for the Devil is the band had already done this, twice, and far better. So aside from the arguably better mix of the guitars, and added psychedelic, nostalgic elements (like the riffs in "Enshrined"), there is not a lot to write home to the morgue about. Toxiene gives a pretty level performance to Dead, Hot & Ready, but here it doesn't feel so novel. Still, the band manages to remain vigorous, exciting and I would even risk the term 'mature' in describing the composition. I think a few of the songs here certainly would function in a mix with the best tracks off the earlier albums, but I only seriously enjoyed a handful of them.

I'll start with the more obvious tracks, like the instrumental "Hearse of the Pharaohs", which I must add, sounds almost exactly like something Mercyful Fate would have written for their 90s reunion effort In the Shadows, with its Shermann/Wead writhing guitar patterns (perhaps a D'Angelo connection here). It's not the first time Witchery has composed a successful instrumental (reference "Born in the Night" from the debut), and it might not have suffered from Toxiene's presence, but its pretty cool to kick back with, especially if you're in the mood for some archaic desert nightmares. "Enshrined" benefits from the flange in the guitars, creating an instant, eerie mystique that flows effortless across D'Angelo's lines (Sharlee has a pretty ribald presence on the entire album). Another of the album's strongest would be "Inquisition", in particular the excellent riffing that surrounds and supports the lead, or the gang shouts out beyond the bridge.

Then there are a smattering of tracks which simply sound like those the band has already written for Dead, Hot & Ready. "Omens" reminds me of "Full Moon" in spots, and "Unholy Wars" recounts "A Paler Shade of Death". The other instrumental on this album, "Bone Mill" has a few riffs that sound suspiciously similar to "Merciless Onslaught", an instrumental from the Metal Church debut! The remainder of Symphony for the Devil is well, simply put, not all that inspiring. "Wicked", "Shallow Grave" and "None Buried Deeper..." wrangle on past the listener but lack the smug chagrin of the band's finer material, and though "The Storm" starts with a promise, and peters out to some boring fast chug rhythms with little to no real payload. "The One Within" is extremely flat until the scraping noise of the leads, and "Called for by Death" sounds like a pretty weak effort to mimick something from South of Heaven.

Perhaps Symphony for the Devil is a sign of a burned out idea, a hollow shell from which the last rays of ghoulish ambition have fled, to be replaced by a cycling of the motions. The cover art, lyrics and production of the record suffice to these eyes and ears, but very few of the audio components have a lasting impact on the psyche. No flitting fantasies of graveyard makeout sessions with a witching slut will infect your brain here, only a few morose monoliths of solid riffing, one of which does not even have vocals. Probably Jensen in particular would feel this burn, after all the guy is writing riffs like crazy for The Haunted in addition to this band, and the two have arguably similar styles when it comes to the guitar thrashing. This is not really a bad album...the band still play the horror themes pretty straight, and explore a few that they hadn't on the past albums. But compared to the first two, it is severely lacking in the black magic department.