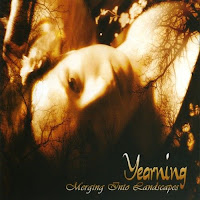 When one looks back over the career of Yearning, one sees an extremely compact and consistent body of work which seemed intent on providing the fan a real value. No EPs, no hack singles, no live albums, and no compilations exist to bilk the listener, simply five full-length efforts of merit. This finite productivity will of course be attributed to the recent passing of the songwriter, the sole force behind the band from birth to demise: Juhani Palomäki, but wherever he is these days, he can at least rest assured knowing that he's not got some regrettable release polluting the lives of his survivors.

Merging Into Landscapes was the fifth and final of these works, and to be honest, it's a relief it ever actually came about. T. Kristian, the other long term face behind Yearning had departed post-Evershade, and it took a spell for Juhani to meet up with another, Aki Kuusinen. In addition, the deal with Holy Records had been severed, and the band were seeing diminished returns of attention with each album (not for lack of quality or trying). Well, thankfully the two parties came into agreement, and Holy would issue this one final album. Good taste and loyalty from a record label? I can't imagine it's all that common, but it's not the only welcome return here: Lady Tiina once again contributed her faery vocals to the mix, and as upon Plaintive Scenes, they are not abused in the slightest, seeking only to compliment Juhani's cleans and grunts.

This album is not a long haul from the sounds of Evershade, though the production feels a little brighter here, and thus not really as cool in the end. The material is adequate and well written, but it's probably my least favorite of all the Yearning efforts. There are some highlights: the glowing power of "Sphere of Disgust", the subdued folk gone progressive doom of the "Lethean Waters", and of course the classic melancholic strut of "The Dying Morn". However, the crunching rhythms, big bass and vocals of "Return" greatly made for the most memorable track.

I also enjoyed a number of the intros and interludes, in particular the haunting ambient prog of "Datura Stramonium" with the brief, almost narrative voice (which sound as if they may be in French, but are pretty distant). As the final song on the final release of Yearning's career, the epilogue "Nemo ante mortem beatus" is sufficiently crushing doom with a sodden, melodic spin, though it doesn't stand to memory.

Merging into Landscapes serves as an eerie premonition, for this band has truly diluted into the mass metal breeding pits, gone with nary a trace of credit or reputation. By this time, Juhani was busy with his other band Colosseum, who in their short stead developed much greater scene buzz than Yearning had mustered since the 90s, and perhaps that affected the overall quality of this last grande finale. Though it doesn't end the band on its strongest note, the album is still user friendly to anyone that has followed their previous output, and in some places pretty darn good. It's clear from both his projects that Juhani Palomäki was a pretty talented writer and musician, and he will be missed by those of us who took the time to appreciate his works. But I feel like Yearning is good enough to last us until that next world. Oblivion calls, after all...

Maybe it's about time you listened to its song.