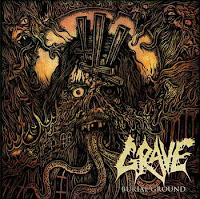 Though it's been some time since anything put forth by this Swedish mainstay has exhumed me from a general lack of interest, I'll admit the band have been consistently churning out some of the more loyal and authentic death metal in their scene since their Back from the Grave revival effort. Burial Ground continues this process, with a filthy production courtesy of the band itself, and I'd honestly say this is a heavier effort than a lot of the 'wannabe' Swedish retro bands squatting outside the sepulcher. Unfortunately, it lacks a wealth of good songwriting, and thus its ultimate destiny is likely to be some forgettable yet crushing footnote.

There is some promise from the first half of the album, once you get beyond the opener "Liberation", a well meaning but utterly riffless opener that recalls the days of yore, Left Hand Path and You'll Never See and all those grave goodies. Okay, there are actual riffs in the song, they're simply average. "Semblance in Black" continues the faster pace, but its churning, soil parting rhythms are at least a little more striking. "Dismembered Mind" is one of the better tracks here, with slow, weighty rhythms that make for a natural junction between Bolt Thrower and Dismember. The opening segment to "Ridden with Belief" becomes slower still, but picks up into a pretty familiar, average riff before a very Pestilence (Consuming Impulse) bridge of chords, a vibe that continues into the following "Conqueror".

By the time the latter half arrives, we're already waist deep in the all too familiar, too trampled genre of Swedish death metal, though "Outcast" and "Sexual Mutilation" attempt to snap up the attention with some of the fastest rhythms on the disc. Sadly, these riffs don't really pan out too well. "Bloodtrail" squanders a punishing, melodic charge rhythm by doing very little with the note patterns, except breaking into a very generic groove. "Burial Ground" itself is the lengthy climax, beyond 7 minutes, slower and reminiscent of Asphyx. A few decent moments of doom atmosphere half way through there, but the riffs inevitably become quite dull.

There is nothing remotely offensive about this 9th full-length, but I expect a little more out of such a seasoned veteran. Grave are one of the longest survivors of the old guard of Swedish death metal, and I feel like something's missing. A few of the riffs land and land hard, the rest just float about the crematorium, like the last ushers picked for the funeral home's weekend volleyball team, lacking much excitement or physical ability. It feels like a situation where they've got a great cover art, a really dirty, meaty tone, and then just sort of record whatever naturally comes to mind, which sounds a little too derivative of themselves and by this point, hundreds of other bands performing such a similar style.