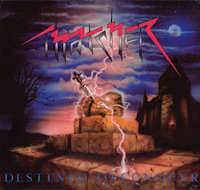 Thatcher was a rather short-lived heavy metal band out of Orlando, Florida which was probably best known for a few of its alumni, who are themselves, well...rather obscure. Rick Rozz (aka Frederick DeLillo) is the better known of these, as he would go on to play with Mantas/Death during some of their critical earlier years, and Bob Rossi has performed guitar on a few of Christian metal vocalist Rob Rock's efforts, but otherwise, nothing much amounted from this project except this sole EP of rather unfavorable, classic heavy metal which was as derivative in 1986 as it is now.

I think perhaps the biggest flaw here is that the band simply didn't have much of a direction, and the material is rather scattershot as a result. The riffs and individual components of the music are not necessarily terrible, kind of a mix of old school USPM and 70s heavy rock and metal like Rush or Judas Priest. It starts with a pretty mellow tune called "Esmeralda", which is moody but more like something Survivor might have written, with slightly more intricate guitar work. Vocalist Brian Rawlings tries to cast a ghostly voice over the damp, sparse, bluesy riffing and the pacing bass, and though the chorus has a decent backing harmony, the rest of the vocals leave something to be desired.

The rest of the tracks are basically straight forward, archaic traditional/speed metal, starting with "Speed Demon", which sounds a lot like an old Priest song. The chorus itself reminds me of another famous metal song, almost note for note, but for some reason (i.e. an early onset of Alzheimer's), it eludes me. The vocals try to impress with a faint backing shriek, but its all quite forgettable aside from that derivative chorus (okay now it's bugging me). "Robbed of my Childhood" is possibly the best song on this EP, as Rawling's uses a higher pitched vocal akin to Bruce Dickinson to set a grim, psychotic feel over the bluesy rhythms. "Witch's Sin" is likewise not so bad, some classic NWOBHM material with shuffling guitars patterned out in fuzzy triplets and an almost Queen-like vibe to the backing vocals.

Obviously, one cannot expect much from the production. It's very organic and 'demo' feeling, and there were a million bands out there in every urban or suburban US community with a similar level of competence and craftsmanship. Rawlings shows hints of skill here, but mostly these impress due to the raw and old school vibe of the material rather than his creation of any catchy vocal pattern. The latter half of this EP is where it actually picks up to about average, but the first two songs have little to offer. Since you can pick up any Judas Priest or Iron Maiden record from the late 70s through about 1984 and you'll hear an example of this style done about 1000x better, there's not much of a market out there. Thatcher seemed like an honest, working man's band and they did not completely blow, but there's just no reason to track this down since the nostalgia and obscurity do not even come close to equaling or exceeding the value of this music.