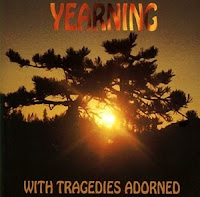 Holy Records out of France was one of my favorite labels in the mid through late 90s, as they had a good ear for signing acts of rare qualities that had enormous potential. Septic Flesh, Supuration, Legenda, Orakle and Tristitia were among the bands they helped break across the underground, and in 1997 they took a little chance on a new Finnish act who performed in a style not common to the day, a morose twist of Gothic, doom and folk metal with unusual depth despite its accessibility. I speak of course of Juhani Palomäki's Yearning, a band that pressed on for 14 years despite the lack of attention received, until its creator's untimely passing earlier this year. Even Juhani's later band, the more extreme Colosseum quickly surpassed this in public interest. So, let this be an elegy. Let this latest attempt at clawing through his discography pay a silent tribute, no matter how unflattering my own skill with words.

Scenes of nature are not uncommon among the chronicles of black, doom and folk metal, but With Tragedies Adorned has always stuck out to me for some reason. Perhaps the tint of the original CD case itself, as it plays on the sun-pierced profile of a tree, whilst a hippie font looks on. It's quaint, and perhaps even amateurish, yet stunningly, this picture somehow manages an iconic capture of the album's aural contents. The seasonal shifting of the riffs, and the lyrical matter might stray from purely environmental strains, but this makes for the perfect listen on an autumn afternoon, alone, reflecting on the past or ruing the present, with or without the assistance of controlled substances. It's also an album whose few flaws actually work in its favor, and I speak largely of Juhani's vocals.

There was really little to compare them to in the late 90s. Yearning sound very little like Anathema, or My Dying Bride, or Paradise Lost, and yet their every bit as sobering. The lead, melodic vocals are almost flat to a fault, with a deep drawl to them that betrays the man's accent while evoking tremendous pain and grief. These are offset with solid quality death growls that remind heavily of another Finnish band, Amorphis, used effectively when the mood is appropriate. It's almost uncanny, really, because there are moments on this album where i feel Palomäki was certain to drop key, yet he seems to hover right at the edge.

Poetry aside, the style of the band could best be described as a blend of soaring, melodic doom carefully clothed in flutes and synthesizers, unafraid to explore a variety of tempos, but sticking largely to a slow or mid pace through which the vocals can emit the most effective and spacious impact. For most of this lineup, Yearning was their first proper outlet into the metal scene. Drummer T. Kristian would progress to play in bands like Thyrane and Saattue, and Tero Kalliomäki would join him in Saattue, but here you've got an imaginative group of guys giving a passionate and polished performance, rounded out by 'Mr. Woodland' Petri Salo's gradual, somber bass lines, and its difficult to dislike anything about this band's sincerity.

If there's anything 'tragic' about this album, aside from its mental setting, it's that not all of the songs are wholly consistent to sufficiently back up its stronger pieces. "The Temple of Sagal" transplants a huge, bluesy guitar rhythm into a mellowing, atmospheric corridor of graceful chugging and vibrant synthesizers, melancholic descending vocal melodies, and I truly love the climactic melodies that enter at about 5:00 and take us out. "Bleeding for Sinful Crown" uses a dual vocal line to transport the listener into an archaic, glorious word obscured in history. "Release" features an excellent intro where Mr. Woodland's underspoken bass line soothes a sequence of teary guitar melodies, from acoustic to electric, before Juhani's damning, downward vocals enter the portrait.

But it is "In the Hands of Storm" which TRULY takes the cake on this album, and possibly any other Yearning effort. A saccharine, super atmospheric piece with an unforgettable flow to its verse-chorus patterns, it is among the more graceful doom metal I've ever had the pleasure to listen through, and remains a go-to track to cure any annoying, sunny weather day. The way the guitars weave below the vocal in the chorus has had me creaming doom in whatever unfortunate garment I happen to be wearing for the past 12+ years. That's a lot of awkward trips to the dry cleaner!

In the hands of storm he is purified
Searching for the sound from the ancient lakes
Heavens open now, clouds are raining blood
This might be the one, our final doom

When the vocal arrives at the growl around 3:00, one simply shake his or her fist at the sky and scream YESSSSSS! "In the Hands of Storm" sets such a high water mark for this record that it's left to the nearly 17 minute finale "Canticum" to try and equal its charms, and though it tries quite hard, it doesn't quite arrive, though we are treated to numerous, gloomy segues bristling with swelling atmospheres, down-trodden guitars and slight piano/synth melodies. As for the rest of the album, it's not quite at the same level, though consistent enough for the experience. You could listen straight through "Remnants of the Only Delight" and not feel robbed of the record's weight, or the more 'uplifting' intro to "Flown Away" which picks up to a pace akin to the verse of "Temple of Sagal". "Haze of Despair" is a solid, crushing piece that parts into some flowing, folksy melodic rock interspersed with sure stepping doom.

Not all Yearning songs are created equal, but there is nothing in this hour of shimmering depression which I'd necessarily skip, unless I was making a line straight to the album's obvious highlight. I was crushed by this performance when I was first exposed to it, and though a good friend of mine had purchased it (on a joint trip to a nearby metal specialty CD shop), I soon worked out a trade that I could hold it in my own grasp and covet its secrets. The album does fall somewhat short of a masterpiece, and in truth it is no longer my favorite Yearning effort, but all the same it's a near seamless debut that affords one a glimpse into this band's broad palette of sorrow.