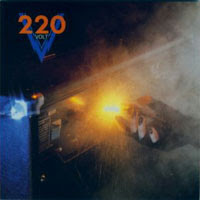 It's almost frightening how much the country of Sweden has matured into such a dominating force in many walks of metal, from the revived traditions of thrash, power and melodic speed metal to the more extreme tastes of black and death, this is a nation with more to offer than high taxes, high employment rates and beautiful women. But this is hardly 'news', as the Swedes have been cranking out a wealth of output since the days they all picked up their first classic metal records out of Britain, Germany or the USA. Yes, long before the explosion of melodic death metal in the 90s or the race to match Norway's black metal scene in proximity, this country was ripe with big dreams, big hair and big riffs.

One of the earliest to adopt the format was the band 220 Volt, a group of youngsters who joined forces to play the music that not only could elevate them on to the national stage, but also the music that they just wanted to hear. After a series of demos in 1982, they had their chance when they were picked up by the high profile CBS records, and their s/t debut arrived the following year, a rough and tumble response to the waves of melodic, traditional metal that were storming across the British mainland. A large portion of the material here was culled from the demos (especially the first demo), but "Lonely Nights", "No Return", "End of the World" and "Stop and Look Back" were all new to this recording. The formula throughout is pretty simple: chord driven anthems glazed with more intricate and arresting melodies, crashing drum kit and the cutting, if wavering vocals of Jocke Lundholm, who is a lot more Klaus Meine than he is Rob Halford.

Listening back on the album, it was pretty solid for its day, and also pretty heavy. Sure, we're not talking proto-thrash metal, but a sheer force in the chords that places it well beyond the strata of the typical, accessible hard rock of its day. For example, it rocks harder than a Quiet Riot or Twisted Sister, and is probably most comparable to other Swedish metal of its day like Heavy Load or Europe (before The Final Countdown). Vocalist Lundholm can nail a good melody, but there's something rough about his vocals which betray his heavy accent, and at times the overall production can suffer. For example, his performance on the Ozzy-like "No Return" is uneven, and I'm not particularly fond of his voice in "Stop and Look Back" either, but for the most part, he's at least got the sense of urgent, raid warning desperation that so typifies classic 80s Scorpions or Riot.

Favorites here would have to include the choppy speed metal of "Woman in White", with some pretty hilarious lyrics: She likes to be seen in the middle, she likes when a party gets hot, everyone thinks she's a sinner, and everyone likes her a lot... Haha. Shouldn't this woman be in red, or black perhaps? Nevertheless, the blazing lead here is pretty hot, and the song overall, one of the demo selections, kicks some serious ass. "Gypsy Queen" and the speed/boogie blues of "Child of the Night" are other highlights, as is the plodding, graceful weight of "The End of the World". A few do not fare so well. "Nightwinds" suffers from some annoying female guest vocals, like being shouted at by a least favorite sister, cousin or aunt during the Holidays, and "Stop and Look Back" and "No Return" do not showcase Jocke Lundholm at his finest.

Of course, many would be immediately turned off by the dated tones of the record, but this has never been a sore spot for any that seek the genuine 80s article with none of the excess modern polish you're going to hear on a HammerFall platter. The songs are pretty well crafted, but in particular the leads and melodies dominate over the actual chord progressions, which are typical of their age. 220 Volt is not the best of the band's work, and they would make gradual strides forward with Power Games and Mind Over Muscle, which are both more accessible and less straightforward than this debut (Europe fans would definitely enjoy them more), but as far as honest slabs of Swedish history, it still sparks a nostalgia for pure, unfiltered European metal as the beast was slowly awakening across a number of nations.