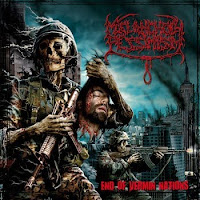 Imagine a band able to survive for nearly 20 years performing an obscure and extreme music, all the while completely under the radar to most death and grind fans the world wide. This is no figment of hypothesis, my friends, this is the actual Czech wrecking crew known as Melancholy Pessimism, who have now issued their sixth full-length album through Epidemie records titled End of Vermin Nations. Through their career, the band has shown little hesitation to keep up with the times, and what we've arrived at upon this new album is a hybrid of death and grind that maintains a modern level of groove and polish, while adhering a Napalm Death level of nihilistic political mockery to the lyrics. Nope, Melancholy Pessimism are not your average gory horror-soaked grind. There is an actual message to their music, no misogynistic male fantasies of bloodied breasts and splattered genitals!

End of Vermin Nations lives and dies on its ability to present compact, competent riffing below the stock grind-grunts of Vlasta Killy Mahdal, and the individual tracks meet varying levels of success. I found "Cunning Psychological Manipulation" to carry enough interesting, intense thrash and death metal riffs to keep my mind spinning as if I had been struck in the cranium with a spiked bludgeon. "Soul Parasites" opens the album with a catchy folk segment, pursued by some rolling, barbaric death metal. "Malediction Hero" is a crusher with another guitar into, and "Spinning Circle of the Sport Industry" balances intense drumming and topsy turvy blast and groove sections.

Sadly, not all the tracks fare this well. The spoken word that inaugurates "Modern Stabbing Culture" alongside some stray harmonics devolves into some pretty run of the mill chug grooves interspersed with very Napalm Death blaster rhythms, none of which are catchy. "End of Vermin Nations" is fairly dull modern Obituary groove with gang shouts, as is "Get Off Bastard". The grooves of "Selfish Politicians Intention" traipsed right out past my attention span, and I simply couldn't comprehend the bonus folk song to form a connection. The boxy production of the record, while adequate for this style, doesn't really add much to the music, thus rendering it a little dry despite the juiciness of the overall guitar tone.

There have been better Melancholy Pessimism records in the past, such as 2000's Evil Planet, but End of Vermin Nations at least seeks to keep the band fresh after a six year pause (their last effort was 2004's Dreamkillers). Unfortunately, I don't see this stirring up much of a wasps nest for the Czechs, since it never really seems to go anywhere, keeping its combat boots laced and in the closet when they should be out on the street fully kicking in some asses. They're not really technical enough to run with the kiddies' attention spans, and they sound quite a lot like a number of Napalm Death's 21st century releases (which don't usually seem to garner more than a temporary nod themselves), though a little less intense. Cool cover art, a couple cool songs and not much else to drool over here.