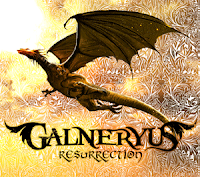 It hasn't taken an enormous amount of time for Galneryus to rise to the top of the Japanese power/classical metal scene, as they've been highly productive and consistent in less than a decade of existence. Yes, by 2010 this band already has 6 full-length albums, a number of singles and EPs, and even some compilations of material, but they've yet to truly knock me out with any of their work. This latest effort, Resurrection falls to the same sort of margin level of entertainment. Galneryus are an entertaining group with all the explosive talent that any in this genre can muster. They can all perform their instruments very well, in particular guitarist Syu who has worked in Animetal and others. The guy is a pure neo-classical speed metal shredder ala Yngwie Malmsteen, and he shows it here, with his numerous solos counting among the album's finer moments.

You've also got a great keyboard player here, Yuhki of Ark Storm and other bands, who can also shred, but rarely goes beyond the call of duty, content with doing his actual job and providing a great backdrop for the rest of the band. Masatoshi Ono's vocals are the expected sort of choppy syllabic emotional outburst in higher range that you can expect from a lot of Japan's power or traditional metal acts (via Loudness, Anthem etc), and the rhythm section of bassist Taka and Junichi Sato's drumming brings this all together with a raging power similar to another band he's performed with, the consistent if often underwhelming Concerto Moon.

So with all this skill and architecture in place, where does Resurrection go wrong? It doesn't, ever go wrong, it simply lacks the added level of power and grace that results in a memorable collection of songs. From a technical or production standpoint, Galneryus can trade blows with almost any other act in the genre, internationally. It's just not all that captivating. Tracks like "Carry On" thrill with their vibrant, anthem riffing, licks of shred and predictable but polished vocal performance, with a nice breakdown that provides the scintillating atmosphere ripe and ready for shredding, tight drumming and a pretty swell of synthesizer packed in. There are a lot more of these: "Save You", "Fall in the Dark", and "Still Loving You" all mix their instruments and velocity well, and I love picking out all the little nuance in the guitar and keyboard interchange, in particular Yuhki uses a pretty broad range of sounds tastefully. The band can also manage a dynamic instrumental like "Emotions" quite well, from the organ tones a la At Vance to the fluid shredding that spins between mystery and enlightenment.

No real bones to pick here. Resurrection is surely one of the most well rounded and coherent of Galneryus' records to date, and in almost all aspects it's a very good outing that would very much appeal to fans of prog/power metal acts, whether they be the similar Concerto Moon or a range of European bands. Galneryus, in fact, keeps a lot busier in the compositions than their peers, and I doubt you'll grow tired or bored in listening through this. It's very accomplished and good, it just lacks that elusive something extra which would push it over the barrier of: Wow, that just happened. These guys can play!