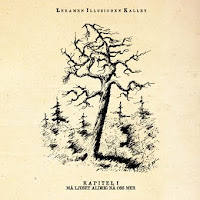 LIK is a curious side project of Graav, who might be better identified with the Swedish cult black metal act Armagedda. The project's name is an acronym for Lekamen Illusionen Kallet, and through three albums Graav has plotted the course that would run parallel to and inevitably culminate in a similar project, Lönndom, with an oft overlapping sound but a greater emphasis on the folk aspects that are found scattered among the LIK records in small doses. This year, a resurgence of interest in the project has manifested in a release of all three LIK albums through Frostscald Records, with comely if minimal new packaging, and ultimately, a decision from Graav to resurrect the project and have it remain concurrent with his other bands. These are the definitive versions, approved in full by the musician himself, and Må Ljuset Aldrig Nå Oss Mer is the debut from 2003.

It's immediate from the first track "Pest Och Pina" here that Graav's aim was to infuse black metal with stripped, rock tones and soaring, gloomy folk vocals that stood apart from much of the 'depressive' minimalist or ambient extremes of the black metal genre. Yet, throughout much of Må Ljuset Aldrig Nå Oss Mer, the music could indeed be considered bleak and basic black metal. The primary differences come in the vocals and the use of the very humble drumming. The drums on this record pop like a garage band from the 60s, and while they might seriously turn away the fan of your typical blasting extremity, I think they really help to set this work apart. I also like the mix of more brazen chords with very cheaply patterned streams of flowing, eerie melodic notes and the occasional entrance of a haunting synthesizer. The vocals visit a number of territories, from mute whispers to traditional black rasps to the aforementioned clean, full-bodied vocals that seem to settle in the region of Gothic rock.

A number of the songs on the album play it rather close to the belt, such as "Guds Förlorade Skapelser" and "Nannlos", which do not often diverge from the simplistic black metal pulsing at the center of Graav's chest. It's perhaps a delicious contrast to mix them in, but they do not bring a lot to the table like the remainder of Må Ljuset Aldrig Nå Oss Mer, which is, to say the least, enticing. "Daupa Sinn" is a rustic mix of evil folk black metal and sonic rock, with the clean and favored vocals. "Hate to be Human", the one song on the album with full English lyrics, is a mystifying piece of brooding dark Gothic/surf-like rock which uses only faintly distorted guitars, horrifying anti-human whispered vocals and jarring background organs. It alternates between two patterns of note picking, and the drums surge beautifully beneath. Frankly, this is the most intriguing track of the LIK debut, and I wish there had been a little more like it.

"Evig Natt" is slightly similar as far as the intro's picking and sparse whispered torment, but it then morphs into a glorious explosion of melody and deep folk vocals in the native Swedish. The final track "Bortom Allt Liv" opens with a lengthy, distorted guitar droning off in muted hues of sorrow, later joined by a second for a full-bodied flush feeling. Several tracks on the album seem to lack bass, or rather the bass is turned quite low in the mix as to be nigh audible. This would seem to be purposely to leech the warmth out of their effects upon the listener, but I'm not sure it assists in the overall tone. Thankfully, it's more prevalent in some of the tunes like "Nannlos".

There is something evasively fresh and unique about Graav's approach to this material which makes it a recommended listen to any fan of the abandoned, depressive, often dry and exposed side of raw black or black/folk metal. It is somewhat shy of a perfect excursion, due to the often restrained journey back into the all too familiar tones of repetitive, subtler black metal, but the mix of these with the rustic rock elements and the tinny drumming is surely a reason to pay a visit to its foreboding climate.