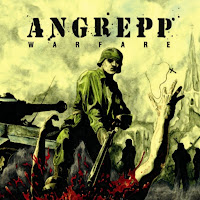 Sweden has long exceeded its quota of producing great bands, but I don't think anyone had the guts to pass Angrepp the memo, so here they arrive with a debut album of flak-jacket, artillery gunning black metal with a huge debt to the classic, barbaric thrash of bands like Hellhammer and Bathory. Similar to Horned Almighty's latest album Contaminating the Divine (which is excellent), this is a band who know exactly how to rock, and they prove that the ability to write fairly simple riffs with a punk attitude has not yet been over saturated, since I found the majority of the material here to be both engaging and entertaining, great for a night out with your friends: that is, if your friends wear spiked armbands and chain-smoke the joints and bones of angels.

But what makes Warfare slightly more impressive than the average shakedown are the brief segues into more eerie riffing territory, somewhat reminiscent of how, on their past 4-5 albums, Norway's Satyricon have manifested their style. Songs like "Dead and Destroyed" and "Firebrand" excel in this area, the former with some huge rocking rhythms that pan out in morbid grooves and excellent leada work; the latter exploding into a grim melodic black rhythm past the half-way mark. "Rape, Kill, Rock n Roll" also segues into this interesting bridge in which a chug rhythm plays alongside some writing doom notes, then erupting into a modern Satyricon styled power groove.

If you've not had enough of that rock style in your black metal, this album's a very pleasant surprise, sure to win all the margin walking fans of black and punk or black/thrash, provided they have no gripes with a cleaner tone, because Warfare is pretty pro sounding, eschewing most of the filth and chagrin of many similar bands, and recorded by Dan Swanö. Almost all of the songs rock, especially those above and the hammer title track, the punk explosion of "Legions Arise", the stoppy breakdown to "Dictator" or the rampant thrashing black that is "For Now I Have Risen".

The riff writing is not complex, but Angrepp requires no overkill or exhibition of their individual instrumental proficiency to impress the listener, because they rock like a bomber over an infantry theater, unchallenged and reigning death and fire upon the grunts below. Very likely to impress fans of thrash, grind and hardcore in addition to the more punk-inspired black metal, so this is one young act that should very well see their star rising before long.