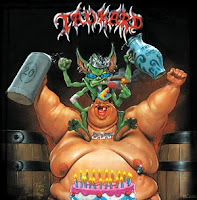 2002 was a big year for Tankard, and the title of their 10th album is not some coincidence, for it represented 20 years of alcoholic thrash and speed metal, rooted in hedonistic abandon and forceful punk. Just how many of this band's German peers can lay claim to such a consistent career? Destruction lost Schmier for years and produced some utter tripe in his absence. Kreator fell off course, as Mille absorbed himself in a number of attempts to re-invent the band (some of these fared better than others). Sodom might be the one steady counterbalance of the Bigger Three, but they took their punk influence to a higher level than Tankard and produced some fun but ultimately forgettable diversions.

But no, not Gerre and his crew of drunks, they were performing blazing thrash and speed throughout all these years of society turning its back on the genre, and though many of these offerings were of mixed quality (some of the records post-Meaning of Life were average at best), there is no questioning of loyalty for their chosen genre. That these guys had not drowned in their own puke by 2002 was nothing short of a miracle, and B-Day celebrates this legacy with a dozen new excursions into their ridiculous aesthetic blend of politics, social observations and...storming beer anthems.

The album starts out with a nice combination of forceful, raging thrash metal. "Notorious Scum" and "Rectifier" both utilize some semi-technical riffs similar to the band's work on the amazing third album The Morning After, though the production here is far clearer and they may have lost some of that nuance. "Need Money for Beer" is a little more punkish, like something you might hear on the band's debut Zombie Attack, and from there, it's anyone's game, since the songs rise and dip in quality. "Ugly, Fat and Still Alive" sums up the band's career quite soundly, with a ripping mid-paced Exodus-style riff in the intro and then an escalation to the same general rhythm of the earlier tracks. A few of the tunes like "Voodoo Box" aren't so consistent, and the guitars lack much interesting going on if not for Gerre's presence and the unending impact their style savors. I'd be a fool to not mention "New Liver Please!" or "Rundown Quarter" which I do enjoy.

But the new album is not all on offer here, for Tankard has also included a bonus disc with their two original demos Heavy Metal Vanguard (1984) and Alcoholic Metal (1985), which are a treat for any long term fan that does not already have them...even more of a treat, perhaps, as you now own them on an official CD. The former is rather crappy, really more of a dirty, unkempt punk sound with more solos than usual for such a band, showing only a cursory tendency towards thrash, though the original versions of some familiar tunes show up there like 'Mercenary'. The second demo is far closer to the Tankard you know, and the versions of "Zombie Attack" and "Alien" are at least pretty adorable, even if not the measure of their later studio album revisions. Regardless, this is an excellent bonus which more bands should think about adding to their newer studio albums when possible. 17 fucking tracks, and two complete demos!

B-Day is not one of the greatest albums of the German puke parade, but it's good enough that the added incentives will make any longtime fan splurge on it. Half the songs here are representative of the bands' better 21st century writing, but there are some slackers, so enjoy it for "Rectifier", "Notorious Scum" and a few more, plus a chance to crack in the band's demos and read the bio included with the booklet, if the often horrifically stupid lyrics like 'now you deal with my smelly butt' have not turned you off.