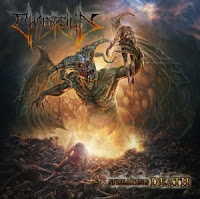 Austria's not a nation I normally associate with a strong death metal scene, and to my knowledge they've never really developed a style to themselves, so then it's no wonder that Chaosreign channels good old Swedish brutality and a dash of early 90s USDM and grind for their debut Spreading Death. The question then becomes one of whether or not this band has the wiles and pure riffing ability to make their mark on a genre stuffed to the gills with overflow acts, and I'm not sure I can give the green light on this, since from a compositional perspective, I heard nothing here that I would remember even moments after the exposure.

They've got some nice aesthetic touches, I will grant them that. The cover art and logo are neat, and the guitars on the record are effectively crunchy and dark. The vocalist sounds a little like L-G Petrov, but with a higher, grating puke style mixed in, and the writing feels like a clash between Repulsion and Left Hand Path. All of this would be wonderful, only I just never got a feel for much of the riffing. Tracks like "Master of Fear" and "Fleshless Disease" rush forth with agonizing, hellish presence, pure death streams that writhe across the steady drumming like an abyssal river, but even in these cases, the songs suffer from a sense that you've already been to the well one too many times. When the band slows for a bouncier approach as with "Dawn Insane (Hey Bitch)", it feels like an unnecessary tribute to Entombed's death & roll material as on Clandestine or Wolverine Blues.

"Murder.Death.Kill" has one nice, ascending riff within its bowels, but even then, the title itself reminds one so much of Paganizer (another retro Swedish band actually from Sweden) who have a similar sound and an album called....wait for it...Murder Death Kill. I'm sure this was not some conscious decision by the Austrians to be thus derivative, but you just can't escape that feeling when listening through this record. They're certainly not bad at what they do, but unlike a Tormented or Revolting the songs do not resonate much beyond the idol worship. The bottom line is that if you admonish every single band to come along and perform in this much loved style, then you're not going to find a problem with Chaosreign. For a debut, this at least has a good mix going for it. Unfortunately, the songwriting is simply not up to snuff. It's certainly not unwelcome to perform death metal of this style, even though we've heard it a thousand times now, but you should at least come armed with some killer riffs that can upstage the next guy.