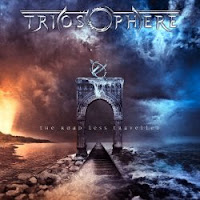 I must confess that I do not often hear female-fronted power or progressive metal that is anything more than laughable, at least not in this century. Not because I'm some misogynist, but because so much of it tries to sell itself on seductive novelty rather than actual, credible songcraft. The UK's To-Mera comes to mind as an acceptable solution, but along now comes Triosphere of Norway with their second album, a delicious offering of accessible, effective writing that will soon cast a shadow on all the lame Evanescence and Nightwish hacks that choke the radio waves, catering to all the nu-goth broads and the self-handjob vampyre hunks that are trying to step to them with any degrees of success (guyliner and Lacuna Coil CDs seem to help...)

Yes, Triosphere can play, and Ida Haukland can both sing and manage the four strings like few of her generation. Her voice reminds me ever so slightly of a Doro Pesch or Leather Leone (from the prime of Chastain's career), and it gives the riffing of Marius Silver Bergesen a run for its money as to what I found most captivating on this record. That is not to take away from the rock solid rhythm section, but seriously, this is the stuff a legend is made of, at least for much of the disc.... Bold, bright riffs that are as complex as they are catchy, with quality leads running amok wherever they see fit, never dragging down the big picture. It should appeal equally to fans of modern or traditional power and progressive metal ranging from Stratovarius to Kamelot to HammerFall and Warlock to Sonata Arctica.

That is not to say that this Road Less Travelled is by any means a perfect path, because I felt that a few of the tracks were lagging behind the rest, but it front loads most of its gems so that you become hopelessly addicted anyways. "Driven" is essentially a wall to wall carpeting of killer hooks, and it becomes pretty hard to top, especially when some of the following tracks are more hard rock oriented in places. Yet, all the same, a "Marionette" or "Human Condition" still delivers a huge chorus, Ida's soaring and piercing vocals exploring each line with an expert grasp of melody, and suitably moody, glossy riffing that reminds one of Michael Wilton and Chris DeGarmo in their heyday. A little later on the album, "Watcher" and "Twenty One" also explode at you, as does "Worlds Apart". The power ballad "The Anger and the Silent Remorse" is acceptable once it picks up to its glorious crescendo, but a little tedious in arriving. The intro "Ignition" is quite nice, at one point spitting out the fastest licks on the entire CD, but the outro piece "The Last Haven" is forgettable. Other tracks like "Death of Jane Doe" are alright, but not nearly as inspiring as the finer moments.

I have very few complaints. Most notably, the bass could be a little bolder and perhaps stand out from the guitars more than what I'm hearing. Granted, she's also the singer, so in a live setting she's got to balance what she is comfortable playing. Triosphere is genuine and infectious, like a brighter, better written female fronted counterpart to Sweden's Evergrey, but they've still got a little room to grow. Their debut Onwards was a moderately interesting affair, but The Road Less Travelled simply clobbers it, and I would be quite surprised if the band did not garner a raving international success based off its many merits. It you're not the type to shy away from modern power metal sounds with a dash of the progressive, then you should absolutely check it out!