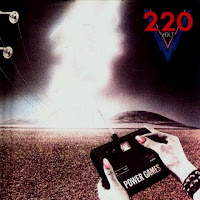 It would be about 1984 by the time it became apparent that 220 Volt deserved much more recognition than they were receiving, because Power Games is a pretty great melodic metal record that easily is the equal of any Europe release, even if there's nothing here like 'that keyboard line', you know the one. The album is both louder and more memorable than the original 220 Volt in every conceivable way, and it sounds like some Swedish counterpart to the American band Riot, with a lot of unspoken reverb to the tracks that simply ricochets off into a night sky full of dreams, aircraft, electricity and expectations.

They were still with CBS records (they would be for the first four albums) and still the same lineup of Jocke Lundholm (vocals), Mats Karlsson and Thomas Drevin (guitars), Mike Larsson (bass) and Peter Hermansson (drums), and you need listen no further than the opener "Firefall" to hear just how much they've developed in such a short time. Brazen, rocking mayhem with a superb sense for powerful chords that heighten both the verse and chorus, while intense, brief bursts of melodic guitar fills contribute to the momentum. This song alone is already better than anything off the debut, and Lundholm has improved quite a lot, with a greater reach that never falls flat as he often did on the previous record.

"Airborne Fighter" is like a searing rhythm & blues metal with some nice melodic bylines and another predictable, yet killer climax. "Over the Top" seems more desperate for accessibility, using some clean guitars and one of 'those keyboard lines' along with the chorus vocal, but it's still got a sense of rhythmic determination akin to a Europe. I also really enjoyed the mystical, plodding "Child or Beast" with its Arabesque verse notation, and "Don't Go" and "Night Without End" are both pretty smooth. One track I did not feel strongly for was the closing ballad "Carry On", though the chorus is strong enough to have it included with the rest of these tracks, and I like the touch of organs that coincide with the lead.

Power Games must have been a pleasant surprise to both the band's label and native fanbase, since its got a brighter sense of 'hit power' without sacrificing the bands inbred metal talent. It's one of their better albums, though on the successor Mind Over Muscle they would take another considerable step up. If you dwell in that gray area between 80s hard rock and heavy/power metal fan, this is one you should make haste to hear.