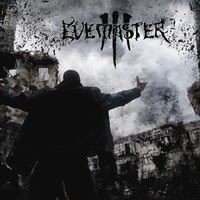 Evemaster have always stuck out a little for pursuing a more melodic direction than many of their Finnish black metal peers, and in fact you could possibly lump them in more with that scene's explosive melodic death scene alongside a band like Insomnium or Noumena, more so than the orthodox black metal artists. Strangely enough, their level of accessibility has not brought them a large amount of success, despite decent offerings like the re-recording of their debut MMIV Lacrimae Mundi back in 2005. The remaining band members have been busy with other projects through the years (Tomi is a member of the more popular band Battlelore), and thus the evasive success and schedule demand that time would be taken before a new Evemaster full-length.

Sometimes a hiatus pays off, and III is proof positive, because it's quite entertaining and I'd even say a few of the tunes are memorable. The band is down to just two core members here, vocalist Jarno Taskula and Tomi Mykkänen, who performs instruments and added vocals, but they've added a host of guests in the studio. The mix is loud and clear, with the right amount of punch and depth to the rhythm guitars to offset the constant streams of melody the band is plucking out of the atmosphere. The rasping vocals are extremely consistent, and allow the band to retain some of the vicious appeal of their parent genre, though the music is quite far displaced from the black metal medium. The grooves never feel cheap, and if the album really suffers from any single point, it might be that the songs always start out very strong through the verse rhythms, and then offer little in the means of a surprise around any corner, which the best melodic death/black metal efforts thrive upon.

There are certain exceptions, though. After the strong but level "Enter" exhausts an emotional melodic force upon the listener, "New Age Dawns" arrives with its choppy rock rhythm and glinting melodies, before breaking down into a nice, resonant melody with Dan Swanö guest vocals. No wonder it feels that you've been catapulted into a Nightingale song for a moment! "Humanimals" is a pretty steady, weighted song with flowing bass lines, spikes of organ and some excellent, soaring black snarls that add a stunning power. "Losing Ground" is mellow but catchy, a progressive metal undercurrent moving through its heart, and "The Sweet Poison" builds to an appropriate climax. If you're seeking some harder tracks, complete with atmosphere and killer licks, "Harvester of Souls" and "Fevered Dreams" should truly appeal.

This is quite likely the best Evemaster have yet had to offer us. The songs are mature and catchy, so that right there will probably have a number of jaded metal fans immediately writing off the band, but if you enjoy the accessible sounds of Insomnium, Noumena, Rapture, or even mid period Katatonia you may find a lot to enjoy in III. The lyrics are pretty political compared to many of the band's more introspective peers, and though they're nothing special, it's at least different. III is not original to a fault, and it's not exactly blazing with compositional depth, but as something you can enjoy and revisit, it excels.