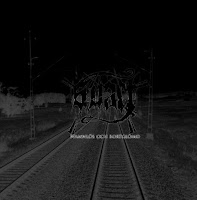 Last year's previous Svart 3-tracker, Våran Tid är Förbi was an exercise in drawn out, graceful suffering that perhaps wore out its welcome in a few of its many refrains. With this latest EP, Namnlös och bortglömd, Draug has truly reined in the excess to deliver a stratagem of concentrated, taxing emotional loss with a superior sense for melody and formatting. In fact, this entire experience clocks in at under 25 minutes, and of that length, I don't think I felt a single moment of unrest or slip of my attentions. I cannot claim that Draug has fashioned an entirely unique space within this extreme of the black metal genre, with riffing drawn from influences like Burzum, Shining and even a sliver of Katatonia's mid period, but he is surely one of the more reliable artists to walk these harrowing paths to the end of ecstasy and desire.

"Den Hemlöses Klagosång" opens at a broad, slow, pace, a single well positioned snarl bounced off its melodic arch, as if to warmly welcome the listener back to the frigid cavern of ice that is Draug's inner being. This gradually passed to a denser segment of crashing cymbals and desolate if predictable sorrow in the guitars, but about 3:00 in there is a beautiful sequence akin to a Katatonia feel, or perhaps Apati, another Swedish band in which Draug moonlights. Here the vocals crash and collide until the track once again weaves down new course of pain which beckons the twilight.

"Den Sista Droppen Utav Liv" is then ushered forward, slowly for a few moments of glistening pain, most prominent in the hearth-like, subtle context of the guitars around 2:00, soon parted to reveal a faintly shining synthesizer line that heralds the oncoming storm of ghastliness that soon erupts. The closing track, also the title "Namnlös Och Bortglömd" marks a massive departure for Svart, as it's entirely composed of dark pianos. Though its outside the safety zone of embedded guitar melodies and rasping laments, this piece is perhaps the most impressive on the EP, a flight of elegy that would fits wonderfully into any empty, abandoned piece of European architecture prior to the 20th century, or against the gathering black clouds of any storm about to enter session.

You've no doubt noticed through my description that Namnlös och bortglömd is a slow moving piece of work, and as such, it might take a certain level of focus and attention to explore its depths more than the next black metal record. Few riffs are used, and these are often repeated enough that some might find a flaw. However, these tracks are all hovering about the 8 minute zone, so the rolling stone of ennui gathers very little snow and frost before the next experience streaks across the burdened sky. Ultimately, this is a piece of delectable entertaining from and for a scarred soul, though my preference still runs towards the band's debut Vanära, Vanmakt och Avsmak and their demo.