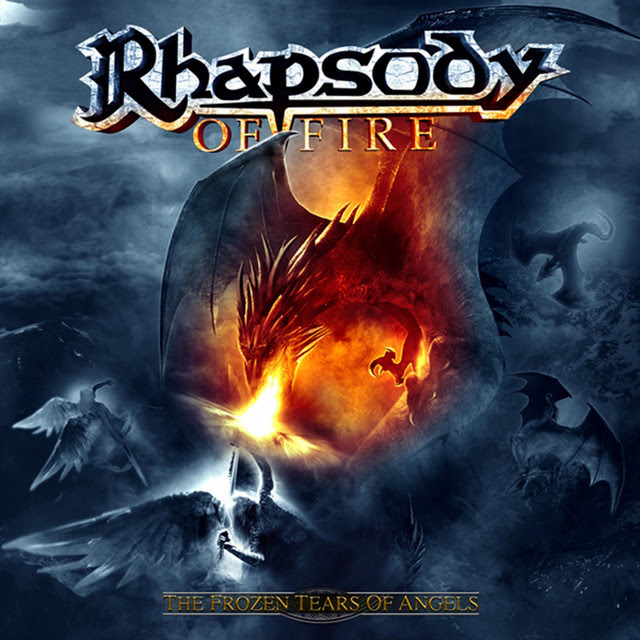 The Frozen Tears of Angels opens with a standard intro for the genre. The synth slowly builds the sound over a few minutes, and, since it's a Rhapsody album, actor Christopher Lee begins his narration.

"Sea of Fate" shreds in its introduction. Singer Fabio Lione pulls the song along with a building lyric that hits peaks and descends again through a stretched out melody. Later the guitar breaks down into a bouncy playful melody before moving into the synth solo. Each musician is on show here with their own solos. Its a proper opener to this kind of album, not the strongest musically, but flashy.

"Crystal Moonlight" reintroduces the symphonic elements teased in the intro track. Nice gothic elements abound in this song, yet the star is an extremely catchy chorus. "Moonlight / take my emotion now / moonlight / never forgive me." The emphasis on the first syllable of "moonlight" will have you humming this bastard in your head all day long.

"Reign of Terror" opens with a whisper then a tightly wound riff. This song introduces harsher vocals, which may be a turn off for traditional power metal fans, but they aren't that obtrusive and necessarily thematic. They compliment the super operatic lyrics. A choir backs up Lione, singing in Latin, while the harsh vocals tug and pull at the choir.

"Danza Di Fuoco E Ghiaccio" brings back Christopher Lee for narration. This one is the slow acoustic number genre fans are accustomed to; however, its fun because of the Italian sound Rhapsody brings to it. Additionally after the four minute mark, guitarist Luca Turilli breaks the mold with a very upbeat and playful solo. It sounds great and is very refreshing against the dark classical sound that inhabits the rest of the album.

One problem with the album is that most of the fast numbers have the same opening. The guitars shreds around the fret board waiting for the rhythm kicks in. "Raging Starfire" and "On the Way to Ainor" begin the same way, so you start to develop some fatigue with the style. Each song has its own flourishes, a harpsichord in "Starfire" and a female operatic voice in "Ainor." Unfortunately both songs would be stronger if Rhapsody had mixed up the formula.

Finally we arrive at the title track and the big 11 minute epic. The first two minutes are dedicated to narration, not Christopher Lee this time, and a nice building symphony in the background. The rhythms in this song are the strongest on the album. Around the three minute mark there is a really nice interplay between the riffing and the drums, something other songs could have used to mix things up a bit. The song doesn't really surprise much after that, but it also doesn't overstay its welcome.

The Frozen Tears of Angels has its strongest songs up front. It doesn't peter out; it simply doesn't mix it up enough later in the record. At this point Rhapsody fans probably know what they are getting, and this is a solid effort. Newcomers, interested in neo-classical shred
and symphonic power metal, could do much worse than checking out this album. Overall it is very well put together, but could stand a little more variety.