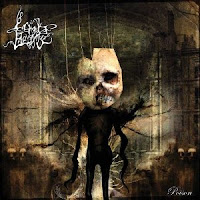 The relationship between classical orchestration and black or other extreme metal music has been a long one, beginning quite early on through the typical incorporation of a keyboard player in a great many big name acts (Emperor, Dimmu Borgir, and so forth). The levels to which bands are able to successfully merge the forms vary from artist to artist. To some, simply having someone strike a few synthesized string sections is quite enough. Others, like the great Austrian band Summoning, go a lot further, using whatever cheap keyboards or samplers they can muster to create epic backdrops that go FAR beyond where anyone could have imagined, the guitars and black rasps used to serve only this sense of grandiose.

I Shalt Become is one of our least celebrated, but best USBM artists to also combine these genres into something magnificent, along with the late Windham Hell, and what's more fascinating is that it's the work of but a single man, S. Holliman (give him a little credit here, because Summoning takes two). But for the longest time, it seemed this project would begin and end with a single album, the debut Wanderings from 1998. Fortunately, that turned out not to be the case, and beginning in 2008, Holliman began to churn out new material at a fairly fast rate, producing decent if not staggering efforts like The Pendle Witch Trials last year. All of this has culminated in his fifth effort, Poison, which it turns out is a mesmerizing, wondrous affair that will be very hard to top, and one of the more bewitching, immersive experiences I've had in several months.

The process is neither novel nor mind boggling. It's what Holliman can DO with it that makes this record so effectively haunting and morbid. Slowly crawling walls of orchestration are created through synthesizers, and over this he layers plucky, often strange, distorted guitars that hover below the bombastic string sections, ethereal female tones that hover at the edge of perception, and a mix of diabolic rasps and male choirs. Together these elements crash like the waves of warring shores throughout history and space, across various epochs and realms of possibility. It's an alien, complex emotional onslaught that is anchored only by the mighty weight of the symphonic ballast. 55 minutes of riveting obscurity that should silence skeptics of such extreme and unorthodox brilliance.

Despite the difficulties in absorbing such a vacuous richness of idea, there are several tracks on Poison which are astutely accessible. "Ghosts" is a calming, escalating piece that simmers in a slightly droning guitar and a mix of 'spoken' voices and snarls, it's uplifting arches enough to woo just about anyone who can appreciate a solemn theatrical score. "Leaving Watership Down" is a bleak piece very much reminiscent of Summoning, with swelling strings and an ever escalating momentum streaked through by the grisly undercurrent of its lyrics and vocals. "Absolve Me", while a little more downcast and disturbing, channels a little Wagner or Mussorgsky, and the intro "Like a Lamb to the Slaughter..." is fairly straightforward.

But the more heightened the tension being explored by Holliman, the more incredible the work becomes. "No Quarter at the Somme" uses stark, lumbering doom metal fixtures against a bustling orchestral backdrop, with some psychedelic wah wah deep in the underbelly that creates a unique and paralytic venom from which you cannot be cured. "Black Swan Events" is like the unraveling of a kingdom, or a planet, or perhaps the very universe itself, with gracious overtures that make the listener feel as if he/she is floating through a vacuum, toward some black hole, the unknown, while the signals of all of man's accomplishments flash past in the void, represented here by sloppy little guitars. "The Finest Cut of the Scalpel" counterbalances a fairly happy melodic key section with some droning guitars and evil, depressive throat noise, and "Harlow's Vertical Chamber Apparatus" slowly gathers warmth as if through enlightenment.

What makes Poison even more interesting are the excellent lyrics of a highly poetic nature, which make for wonderful reading, even if you won't often be able to pick them out of the albums terse, audio fabric. Here's an example in "Ghosts":

Still you, ghost, are bothered by instinct
And whispers and falling icons
The failed attempts at a distant second
Oft ignored
Murder

A beating that took its toll...
A pound of flesh consumed.

Minimal and meaningful, but for fuck's sake, if only 50% of bands could put this much effort into their actual lyrical matter metal music as a whole (in all its encompassed genres) would be considered a far more potent distraction by all the heaps of ignorami who curse its existence. The expressive nature of the lyrics creates food for thought that survives well beyond the confines of the actual audio experience, and I Shalt Become is thus a master of abstraction in all walks.

Holliman might not offer a structured alternative to Summoning, after all, he explores more ground than a single fantasy setting, but I really feel like fans of that Austrian band's sound itself would do well to explore what this Illinois artist brings to the market. Also recommended if you enjoy the latest works of the Polish act Hellveto, who has recently pursued a similar mesh of martial, orchestral bombast and savage, uncut black metal aesthetics.