Odem Arcarum - Outrageous Reverie Above the Erosion of Barren Earth (2010) 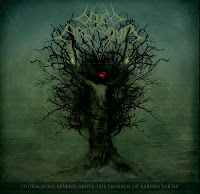 The title to Odem Arcarum's second full-length album is more than a mouthful, but don't let it curb your appetite for mayhem, because this is easily one of the more interesting black metal albums I've heard of late, and a major improvement over their self-released 2003 debut Bloody Traces in the Virgin Snow. Like Kaatharia's The Complex Void of Negativity or Dark Fortress's latest diversion Ylem, these Germans have a true inclination towards the progression of their chosen genre, and Outrageous Reverie Above... (okay, I'm not spelling that out again) is a trance waiting to happen for the open minded listener. Rooted in the traditional, faster paced black metal and minor chord ripping of their Norse and Germanic influences, Odem Arcarum incorporates beautiful ambiance and bizarre riff structure of a sort rarely experienced.

The result is something akin to Picasso painting a Dark Funeral song into a 2-dimensional image that glares at you through its surprising depth, vistas of regret and shattered human faces. To listen to this album is to feel yourself separated from the Earth, made a living satellite to orbit the world, watching as the colors of its landmass choke in kudzu, as if covered in a great, settled moss that consumes all civilization and puts it to slumber, slowly sapping the life from the sleepers. It's not such a surprise that the band features Ar (Lord Ariach) of Secrets of the Moon, and Skoarth (Stefan Botz) or Lunar Aurora, because this act is able to create a like minded, oblique offering of weightless menace and power.

The "Gate" into the albums Earthen depths is a cautionary trawl of swelling electric guitars over sparse drumming, walls of ominous synthetic apathy and clean, rolling guitars, but as it dives into "Oceans" the level of chaos picks up considerably, with subtly shifting tempos and an endless river of riffing that ellipses from the progressive to the driving, unheavenly traditions of an Emperor or Covenant. The middle of the track breaks down into a segue of dark acoustics and pianos above the steady bass handling of Zahak, as if it to build suspense for a film. Oh, the joy of despair! Other tracks of note include "Worlds of Barren Land", for its haunting intro and the gleaming, morbid synthesizer lines that glide across its churning black surface, and "The Body & Perpetual Imagination", which plays like a highlight reel of emotional range, from spires of antimatter-torn mountaintops to the vacuous, squirming corridors of its belly.

Perhaps the most impressive aspect of the album is it's ability to transfix you for such long periods of time, without rebuke. Nay, you will not find yourself seeking oxygen here, only suffocation within the bewitching depths of each 7-16 minute long composition...and coming from one who often finds so much needless meat on the bone of the experience, this is high praise, especially in the black metal genre, where so many bands fail through a horrid, uninspiring nature of repetition. An Outrageous Reverie indeed, Odem Arcanum have returned from a long lapse in time to produce a work wholly worthy of your attention and respect. The album might require a little patience, but in the end you will have opened the third eye and seen yet another face of God, your Universe, as it began to peel back the threads of existence and stare directly into you through a great, void-lidded eye.