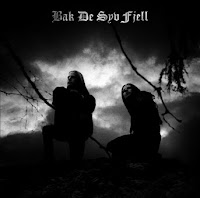 In addition to their selection of up and coming artists like Svart, Frostscald Records and their affiliates also specialize in the re-issue of select, forgotten obscurities that demand to be given a new life. In the case of Bak de Syv Fjell at least, this 2009 re-release is a tremendous opportunity to get one's hands on a gem that was available only in a 7" format when it was originally pressed. The band's name translates to 'Behind the Seven Mountains', and they perform a pretty fresh (for its day) take on glorious folk black metal which is highly likely to remind one of the earlier work of Ulver (Bergtatt or Kveldssanger) and perhaps Sweden's Vintersorg on his better solo efforts (Till Fjälls and Ödemarkens Son). The band was a two piece, with a singer/guitarist named Haavard and the better known drummer Einar Selvik, who has played in Gorgoroth and Sahg but currently works with Jotunspor and Wardruna.

This EP has been issued at its original length, with just the two tracks, minimal packaging and no bonus material (not that there'd be anything but rehearsals to draw upon), and it runs for a little over 8 minutes. Its brevity might be a turn-off for some, but the music is really quite good. "From Haavardstun" itself is a soaring, melodic piece with a fuzzy guitar tone and the conjuring of both clean, male vocals and female accompaniment that work well in conjunction. There are two guitars, one used solely to carry the rhythm and the other adding a more emotional spike to the mid-paced procession. There will often be some lower, spoken words, but these are sparse. The other track "De siste tankar" begins with some rousing, folksy clean guitars before it picks up into another glorious surge, the band switching verses between the femmish vocal and then the male cleans. This is perhaps the stronger of the two tunes, and I can certainly hear its appeal to fans of all manner of current folk/Viking material, from Borknagar to the sillier side of things like Thyrfing.

Einar is probably busy with a hundred things, but there is some possibility that this act Bak de Syv Fjell will be returning with new material at some point in the future, and it's possible that the reaction to this re-issue might play into the chance of that happening. I don't have many complaints with the music itself, though not all of the female style vocals are that enticing nor thrilling. Placed in a more modern context, with new recordings of a similar nature, this band could potentially gain the respect that has long eluded them. The From Haavardstun EP is very brief, and not worth paying more than a few dollars for, but it's a positive window into the prior decade when material like this was not as commonplace as the clouds, and the rather innocent perspective it takes is refreshing.