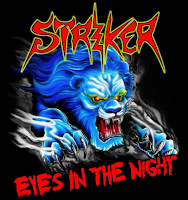 The Canadian Striker is a hungry young band intent on riding the wave of retro heavy/speed metal to its natural course, but unlike a few of their less interesting peers (White Wizzard, Cauldron, etc), they've actually got some serious talent in this department. I wouldn't place them yet on the level of Sweden's Enforcer, who I believe to have this entire 'movement' in their pockets, but they know how to rock a track, and there is very little posing involved. In other words, this is not a band who have sat around thinking how to act stupid and dress appropriately in some archaic fashion sense, but they dress like themselves and take the time out to fashion some actual songs of note.

These are not exactly timeless hymns, mind you, but I felt fairly satisfied in listening through the entirety of Eyes in the Night. The titles do feel streamlined with the whole 80s package, and the music feels like the natural product of some clash between higher paced NWOBHM and the American band Riot's boundless hard rocking energy, but this would probably only bother you if you were born within the past 20-25 years, and even then, most of the crowd clutching on to this wave of bands (in particular the mediocre White Wizzard) seem to be younger guys exploring the style for the first time. Hey, all the power to them! I dream of days I can encounter these kids at the local shopping center, and they will approach me with praises of Saxon and Angel Witch rather than the latest 3 Inches of Blood and Trivium garbage. I long for such a glorious future!

Eyes in the Night is all new material, nothing overlapping with last year's Road Warrior EP, and I feel the writing has taken a turn for the better. Tracks like "Eyes of the Night" and "Voice of Rock" open a portal to some parallel universe in which Mike Dimeo (of Riot fame) once fronted the British band Grim Reaper, and I will admit to banging my head to these and more, sending the headphones skittering across on numerous occasions. Dan Cleary's got a great attack that you simply do not hear often in this generation, and the leads are fluid and carefully composed. But perhaps the best track on the album is the opener "Full Speed or No Speed", a soaring example of North American speed metal, despite the obvious glitter and self-referential, unnecessary genre references in the lyrics. "The White Knight" has some screaming, scorching Zakk Wylde-like melodic fills and "We Don't Play By the Rules" is uplifting in much the same way as the large host of early to mid-80s Raven rockers.

Best of all, the album is not subdued by some shitty ballad, a characteristic most of these bands feel they must adhere to. Striker flies like an eagle from beginning to end, and though I won't say the songs are hooky enough to stick with you long after your exposure to them at a cranked volume, it's difficult to sit or stand still while in the actual process of listening. They grab their beloved era by the balls and hang on tight, without the annoying spandex and hairspray. This is not about reliving the Sunset Strip and picking up chicks that look less effeminate than you do, it's about metal music. The Tygers of Pan Tang might want their album art back, but fuck if I don't want it spray painted on my van.