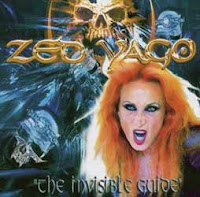 Yeah, it happens. It happens more often than we'd like to admit to ourselves. Bands scuffle, and due to a number of concerns, they go their separate ways. Thus was the fate of Zed Yago after just two glorious albums in the late 80s. Jutta Weinhold, Lars Ratz and others would form the 'follow-up' project Velvet Viper, releasing two albums and then once away going the route of extinction. But other former members were not so fast on the initiative dice. Jimmy Durand, a good guitar player and writer by all accounts from the old Zed Yago albums, wound up the owner of the Zed Yago properties, and some 16 years after the brilliant Pilgrimage, he decided to continue the band's legacy. But this time there would be no Jutta Weinhold. This time Durand's own wife, Yvonne Durand would be the front woman.

This is probably where it all went wrong. Now, I don't know this guy personally, and if he wants to continue using the band name he legally owns, who am I to stop him? It's really a question of taste. If you're going to release a new Zed Yago album, then you owe it to yourself (and perhaps you owe it to your fans, if you care for them) to release something of equivocal merits. Clearly, The Invisible Guide is a major step down for this band, and a slap in the face of anyone who had any real expectations for a reunion album of quality. Like so many other bands that reunite or try to adapt themselves into modern times, it includes a far more excessive electronic presence ("If I Close My Eyes Forever") and a production that meets contemporary standards. There is a metal shell here which has riffing of the same vein as From Over Yonder or Pilgrimage, but the riffs feel pretty hollow, as now they've been used for decades and this incarnation of Zed Yago is bringing nothing newish to the table, though once they felt pretty fresh. It feels a little like Scanner's mutation Scantropolis, except that album had good melodies and decent songs.

But the truly terrifying elephant in this room, the immovable object that prevents all appreciation of this music, is the vocal presence of Yvonne Durand. I'm sure she's trained her voice, I'm sure she had all the best intention, but she sounds atrocious here! She attempts to give her voice much more 'edge' than Jutta once held, and the result is almost consistently laughable as the poor Zed Yago fan suffers through 42 minutes of nonsense. You know when the backing male vocals of the band are FAR more talented and melodic than the front woman, that you have a SERIOUS problem, and she occasionally sounds more like a bad, heavily accented male singer from some demo level Euro power metal band. She's like a Tim 'The Ripper' Owens. She tries far, far too hard, and it often feels as if the band are just clowning around. Are there exceptions? Well, not really, though I would say "The Invisible Guide" or "Fire" at least match up to her more 'witching' style. But when she starts talking in a more conversational tone, like an Eric Adams on estrogen, it becomes even more embarassing...

Ugh! It might be one thing to accept these vocals if the backing music was worthwhile, but even here the record suffers. Not a single riff on the entire album stands out as something I would want to come back to. The style is not so hugely differentiated from the band's 80s output, and yet there is a certain sheen to the writing of old that is just as invisible here as the guide in the title. I'm used to hearing some pretty weak reunion efforts, since just about every band and their mother that disbanded in the 80s and 90s have pulled something together in the 21st century, and many cannot live up to the earlier lineups or original inspiration. But this album is downright shameful, and I wish I could pray to some Chronological deity to convince Jimmy Durand to change his mind, dial back time, and NOT issue this under the name Zed Yago. The album's existence is painful enough, but the thought that some younger fan might hear this atrocity and then automatically discount any curiosity towards the band's earlier albums is heart breaking.