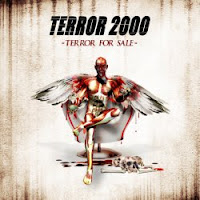 With their third album, Terror 2000 continued to polarize their intentions, moving further into an awkward, silly lyrical territory while continuing to utilize the same rhythmic thrust, led by the twin guitars of Ideberg and Sword. This was also the first album on which Speed himself did not perform the bass, those duties being taken on by Dan Svensson. It also feels really 'samey' sounding, as if nearly every riff on the entire record were already used on one of the previous outings, and they're just re-assembled here and dowsed in hideously unfunny lyrics.

I'm serious. These are not even remotely comic in the crudest of sense, an endless rattling off of cliches that forever haunt the metal life style, or shall I qualify that as the 'rock star' lifestyle. Drink booze, take some drugs, party, and pay lip service to your metal heroes. An endless cycle of excess! Truly this is artistry on the cutting edge of the surreal! You see, when Tankard wrote songs like "Commandments" and "Zombie Attack", it was the 80s. It was actually pretty funny then, because for all the silliness, they were played rather straight, and the very practice of humor in metal was still quite novel. By 2005, this is long past its expiration date, and hearing self-referential tripe about being a rock and roll star, no matter how ironic, just feels too hammy to evoke a genuine giggle.

I wanna be a hunk with a metalguitar, cause people tell me i could go pretty far
I need some kicks as in Kerry King licks, and get the chicks by the bar
Now its lunchtime, cut the barbwire, I'm going to the deli and get myself a wrap
Life is crazy, this job makes me a suicidal freak feeling like crap

Such are the insights of "King Kong Song", one of many ill titles on this record, that include the "Metal Mosh Massacre", "Wrath of the Cookie Monster", and "Satans Barbecue". Perhaps the one title I smiled at was "Liquor Saved me From Sports", because it seems like there could be some truth in that. But in the end, there's just no overarching concept to Terror 2000 which is the measure of all of metal's funniest acts. Cliche after cliche, and the goofy vocal whining mantras the band includes in tracks like "Flesh Fever Fiesta" really drag this album down the gutter, no matter how many violent, thrashing outbursts the guitars have lined up.

Oh, and they do thrash, with the same level of tireless momentum that Faster Disaster displayed, and a denser, thicker tone. But there's nothing novel about the band's energy this time, and in fact, it all feels pretty exhausting here. Speed is sounding even closer to his 21st century Soilwork vocals, which have grown even more in tune to Anselmo, though he adds more gang shouting atmosphere here, some growls, and avoids the melodies of his main band. The solos are pretty boss, wheeling and winding their way below the retarded lyrics, and this is really the downfall here. They're like a fecal frosting on your birthday cake, signed 'Metal is here to stay', and unless you're the odd scat lover, you will probably never bring your business the that bakery again.