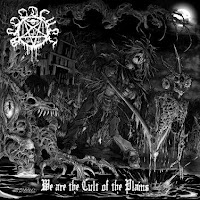 Proof that there is always something you haven't heard, even when you fancy that you've actually heard everything, Blood Cult is a band out of Illinois with well over a dozen demos under their belts, a good number of compilations, a few splits, and one previous full-length album, We Who Walk Behind the Rows, which was released half a decade ago. However, this new album, We Are the Cult of the Plains, is only my first exposure to their rather unique formula. You see, Blood Cult is not just the average black metal artist, despite their rather obvious title. They incorporate punk, rock and roll, hillbilly, bluegrass, and even a twang of aggro-surf and country rock into their grim facade. The results are mixed, and by no means do I feel the band has yet perfected its eclectic aural Frankenstein, but they are certainly one of the more intriguing sounds to emerge in a USBM landscape hell starved for fresh ideas.

The songs here are quite varied, and Blood Cult often focuses on one genre more than another, but there are numerous examples where they've adapted the perfect blend of their constituent influences. "Lusi Ceriales" is like a long, jamming grunge piece with some snarled vocals, nigh on endless guitar wailing and a constant, mesmerizing clean guitar that rings off through most of the song's 8+ minutes. "My Forest Home" transforms from raw but melodic necro black metal to some drudging rock and roll with a dark, almost surf line cascading beneath. "Seeds" is another of the band's mixtures of atmospheric black metal, harsh rasping vocals, bluesy shredding and bloodied stream of melody, with glorious, plodding bass lines and more of the band's penchant for just jamming off on the lead guitar (perhaps too long). "Illinoisan Alter" is like line dancing for lunatics, Wild West black country folk that seems the perfect fixin' for a fight, a horrific hoedown, Satanic gunmen at the Golden Dawn, casting curses at one another while the bullets fly. I honestly didn't know whether to laugh or cry, it's so entertaining. There are some cool, shorter songs here too like the sludgy, depressive black punk rock & roll of "We Came Back" or the more eerie, 'proper' black metal time warping of "Necromance".

It does feel like the band could use a little more fine tuning. For example, a few of the guitar lines just rattle on and on, with very few interesting variations. Their more metallic riffs are clearly the forte, and when they go off jamming on some of the longer tunes (like "Lusi Ceriales"), you do feel a longing for something more interesting to occur. In fact, the shorter tracks on this album are simply the best you'll hear, even if they're more conventional than fare like "Illinoisan Alter". No problem with the vocals, and I really love the production of the album, which is pretty raw and honest, as if this might have been the first black metal record put out by SSI back in the day, a mix of old Screaming Trees, Descendants, and Burzum.

We Are the Cult of the Plains is quite unique, at least to my ears, and it fascinates me to think of the possibilities of the entire realm of American indie rock, folk, country and punk being manipulated and bastardized into raw black metal. Blood Cult are well ahead of the curve here, and should they ever muster up just the right amount of killer riffing and writing to balance out their obvious wealth of idea, they could become a dominating force here in the US. This is a really good record, and very fun to listen through, but I have the feeling they can do more. And, for the love of all that is unholy, please keep this cover artists, because that is goddamn sweet looking.

Highlights: My Forest Home, We Came Back, Necromance, Cult of the Olains, Never Said Goodbye

Holy fuck. It's like the soundtrack to a vast portion of my childhood.