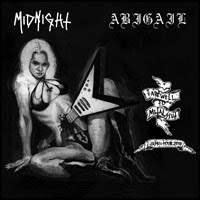 Midnight and Abigail are both good bands, and their pairing on this 7" is only natural, especially seeing how they just got off a tour in Japan together. This is a limited run, of course, with a US pressing and a separate pressing that was available only on their tour, so it's obviously intended for the most hardcore collectors of the bands' material, in particular Abigail, who like their countrymen Sabbat, participate in a great many of these releases. I may be a huge flag waver for digital music distribution, but its cool that we have such a vinyl culture surviving today, and it's not like anyone is being charged an arm or a leg for most of them.

Unfortunately, a lot of these 7" splits are often too skimpy to take seriously, and Farewell to Metal Slut does suffer from the symptom of useless indulgence. There are only two tracks on the EP, one from each band, and neither is an original studio track. Having Midnight and Abigail team up for a 7" of new material, perhaps 2-3 songs each, would have been well worth the investment, but that is not the case here. Abigail's contribution is a live cut of "Teen Age Metal Fuck" from their recent Sweet Baby Metal Slut LP. That was a fantastic album, and it sounds pretty good in the live setting, though the actual recording is pretty lo-fi. Just another reason to get jealous that I haven't seen the band! Midnight offer up a cover of Quiet Riot's "Slick Black Cadillac", from the 1979 album Quiet Riot II. It's a cool choice of cover, and the band give it a blackened edge, making it the perfect counterpart for Abigail's sound in general (at least for the past decade).

Indeed, there is nothing offensive about either track on the 7", only that it ends there. For collectors, this is just another piece of rare plastic and a sleeve to put in their bin, or on display. For an avid music hunter, it's just 8 minutes with a smile and a wink from two bad ass bands, and the money would probably be better invested in Midnight's Farewell to Hell EP, or any of the Abigail full-length records. So unless you sport an erection for rare collectibles that you can show off in a few decades, to the few hundred other people in the world that really care, I would not go out of my way to acquire this.