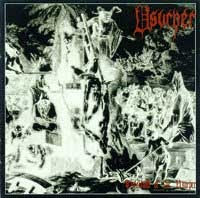 I wouldn't have thought it possible that a band like Usurper could actually get any heavier, but after signing to Necropolis records to produce this follow-up EP to Diabolosis, the Chicago crushers were more than eager to render any such doubts obsolete. What's more, this material bears slightly less of the direct Hellhammer influence found on the debut. It still exists in both the vocals and music, but the band commit such a primal, pulverizing crime against humanity here that they've taken the weight of their forefathers to a new level of extremity. I can only imagine on some grim battlefield, the sound of tank treads tap dancing on human bones would sound somewhat similar to this dense, uncaring, unholy mess.

The bass is thick like a pungent tomb of oppression and despair, and the guitars sound even more punk and hideous than the original Apocalyptic Raids. "Slavehammer" sounds like something that might have occured if Hellhammer had arrived AFTER the death and black metal movements went into full swing, while "Necrocult, Part 1 (The Metal War)" is pretty much a pure, thrusting black blade that caresses the night with the blood of its latest victim. "The Dead of Winter" is a morbid, atmospheric horror with these thick acoustic guitars that reverberate through the dense mesh of chugging force. The band's cover of Mercyful Fate's "Black Funeral" is nearly as creepy and mesmerizing as the original, but made wholly fit to preach upon the heathen pulpit that is Usurper. Lastly, the 14:20 closer "Threshold of the Usurper" ranges from terse, storming doom to rampant, ghoulish black metal and then back again, pausing at its center for haunting atmospherics and samples of vile chanting.

With over 34 minutes of music, Threshold of the Usurper could just as well have been a full length follow-up to Diabolosis and nobody would have complained. There is a reissue of this from 2008 which includes even more material, so if you're on the market you will get more value out of that. Like the debut album, the mix on this material is so mighty that it loses nothing to age, an unrelenting brute of awful anguish and creepy torment. Like the debut debut album, it deserves a place in the collection of any who seek the morbid fascination and cryptic taste of raw, abhorrent musical flesh.