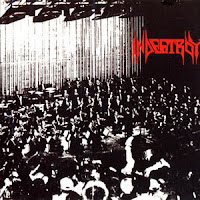 Indestroy's self-titled 1987 debut album is just one of those charming little numbers that claws away at your memory until you concede defeat and offer it the reverence of the ages, placing it upon your 2nd tier thrash pedestal, below the greats, but loftily elevated above and beyond so much of the genre that would follow in the ensuing decades. One of the true highlights of the entire New Renaissance roster, Indestroy was a crude and admittedly low budget recording, but that hasn't stopped it from acquiring a cult immortality status within my record collection. The production only made it that much more endearing...

However, that album would not be the last for the Maryland ragers, who issued the Senseless Theories EP through Restless Records a few years later. The sound here is a little sharper, lacking some of the muddied and laconic feel of the guitar tone on the full-length, but it's also clearer, and the band has not changed its approach to writing simple, effective thrash with fairly catchy chops and the atmosphere conjured by Mark Strassburg's filthy, almost crossover vocal style. One exception might be the slightly more technical embellishments to the guitar riffs. A good example of this would be the Destruction-like passage in the latter half of "Tortured by Fire", or the chorus of "Instant Insanity", but this is more of an exception than the rule.

With a few more tracks tossed on the end, this could have been a full-length itself, and a good one, if not the equal of its predecessor. Most of the songs here summon forth at least a few good riffs, and in some cases, superb riffs. The evil, wiry grooves of "Living in Filth" and the hostile Slayer/Possessed surge of title track "Senseless Theories" both come to mind, but these are not alone. "Instant Insanity" is a frenetic, pacemaker-busting piece with solos flying off the hook and some eerie weight to the chords and effects beyond the 2:00 mark. "Terminal Choice" and "Sam the Butcher" are worthy enough to be in this company, but not the more memorable tracks found here.

There's nothing senseless about this material, though it doesn't quite live up to the more primal and entertaining debut. I wasn't about to run around howling these songs out loud as I once did with "U.S.S.A" or "Dead Girls (Don't Say No)". However, this is far, far better than the band drummer Gus Basilika and vocalist/guitarist Mark Strassburg would later form, the doom oriented Wretched, whose name was all too fitting, though they managed to score a deal with Hellhound regardless. Senseless Theories won't blow your mind, but it's at least quality thrash from a state that produced very few such bands, being known more for its death and doom scenes.